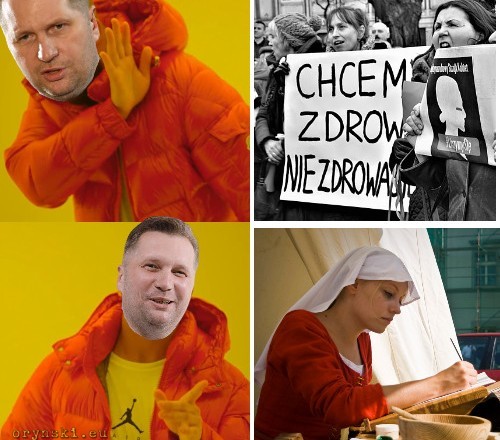 So if you wondered why the English football team lost the final game to Italy, Mirosław Szumiło PhD, the employee of the Insititute of National Remembrance and an advisor to Przemysław Czarnek, minister of Education, is happy to explain: “English lost because of political correctness. They put forward as many as three black players for the penalty rounds and none of them scored. The coach could choose from more experienced and better players. Why has he chosen those three? I suspect it was due to racial parity” – he wrote on his Facebook. And he has the point. That’s why the Polish team, in which there is not a single black player, is doing so well in football, right?

But perhaps it’s the women to blame that Poland hasn’t won the Euro? Perhaps Polish female football fans were showing too much of their beautiful bodies when cheering our team and thus disoriented the players? Or, wait the minute, what they are doing in the stadium at all, who let them out of the kitchens? Luckily, minister Czarnek has more advisors, and one of them – Paweł Skrzydlewski PhD, came with a brilliant diagnosis: “Today we observe a very dangerous phenomenon in our culture. A moral, but also the religious phenomenon of the spiritual rot of a woman that consists of awakening the pride in women, that results in vanity, egotism and fighting the objective order of the things, trying to replace it with looking more for yourself” – he said in the interview with the pro-PiS paper. According to dr Skrzydlewski, the changes to the school curriculum are needed. Women should be raised in a way that “establishes womanly virtues in girls”. I am actually having problems with translating this sentence, so, dear readers, please just imagine it is spoken in outdated language using terms that were going out of date in mid-XIX century…

Meanwhile, in the XXI century, the institution known formerly as Constitutional Tribunal, and today transformed into a puppet theatre of Kaczyński run by Julia Przyłębska, is to rule on the matter if the European Union’s law isn’t contradictory to the Polish constitution. This is yet another chapter of the ongoing war between PiS and Poland, supported by the European Union, about their hostile take over of the judicial system. I have to admit, I don’t really understand why Morawiecki needs this ruling. Even if (or, perhaps, we should write “when”) Przyłębska’s Tribunal decides, that the EU has no say on the rule of law in Poland and Poland does not need to align itself to the European Standards, it won’t make him any good. The Przyłębska’s tribunal as it is is an illegal institution in itself after PiS appointed some judges in an illegal way, and made Przyłębska – who does not possess relevant experience and qualifications – unless we count the fact that she’s a “social discovery” of Kaczyński and cooks a tasty soup for him – it’s chairman. So its verdicts will not be taken seriously by anyone but the PiS most hardcore voters. But to them, PiS can pretend to be “the defenders of the Polish constitution”. At the moment of writing, the Tribunal sitting had been adjourned till the next day.

But while nobody treats seriously verdicts coming from PiS puppet’s institutions, PiS does not treat seriously the rulings of actual courts. The opposition activist, who every month places a wreath to the “victims of Lech Kaczyński, who forced pilots to land in unsafe conditions” under the monument for the Smoleńsk plane crash, only for it to be stolen by the soldiers assisted by the police (see more here) has won his case: the court ruled that his wreath is not offensive, and if someone is tarnishing the memory of the victims is the soldiers, who forcibly drag away people not approved by PiS from the vicinity of the monument. And yet, just a few days after the court ruling, the opposition activists were yet again attacked by soldiers when placing their flowers under the monument:

The situation under the monument to the victims of Jedwabne pogrom, where Jewish inhabitants of the village were brutally murdered by their Polish neighbours, was also tense. The Police cordoned the monument and for nearly half an hour refused access to the people who came to the celebration. The police tried to check the ID of every single participant – despite having no legal grounds to do so, as the celebrations were held in the open air in public space. The police claimed that this is due to security concerns and stepped down only after personal intervention from Citizen’s Rights Ombudsman, who was present at the location.

Strangely enough, there were no police or security concerns earlier, when nationalists staged a manifestation there. The Polish extreme right claims that Poles were not involved, and the Jews were in fact murdered by the Nazis and the whole thing is a conspiracy to blame Poles for Nazi atrocities. Apparently, the bunch of neo-Nazis, anti-Semites and extreme-right activists is not a risk. The Human Right’s Ombudsman, left-wing MP’s, members of the Polish Jewish community and representations of the Israeli, German and US embassies are.

If ANYONE still has any doubts about PiS alliances, let me just give you this: Robert Bąkiewicz, leader of the extreme right and one of the organizers of the annual Independence Marches in Warsaw, which are just gigantic displays of extreme nationalism and during which neo-Nazi, anti-Semitic and racists messages are openly carried, has (or rather: organizations related to him) received more than 4 500 000 zł of government grants, including 1.7 mln for the National Guard, the right-wing militias that have been created in response to the Women’s Strike. Bąkiewicz intends to use this moment to repel the “Leftist offensive”, as the “left side” is “drowning in the money” so they have more activists, as they don’t have to work, apparently. (Hey, Mr Soros, I am a lefty, where are my money? I am bored with working already!). But finally, Bąkiewicz gets what he deserves “We grafted hard for many years so in that war of civilisations that is going on we can have any supplies, tools, “guns” to fight with our enemy, who has a nuclear weapon at their disposal” says Bąkiewicz.

As you can see, the construction of the totalitarian state progresses on all fronts. Morawiecki teamed with Julia Przyłębska to break with the European standards of rule of law. Police and the army fights with the opposition, and when there will be the need to go the extra step, the right-wing militias are being prepared on the side. Most of the Polish local papers are already taken over by PiS, and of the major TV station only TVN still become fully independent from the government. Which really annoys PiS, that’s why they prepared a new law, strictly aimed at this TV station. Their broadcasting permit is up for renewal, and the new law will make it illegal to grand broadcasting laws to the companies that “are dependable from persons or legal persons from the countries other than those of the European Common Market” – which is clearly aimed at TVN, owned indirectly by an American holding. PiS does not even try to hide it – one of the most important PiS politicians Marek Suski openly said that if this law will be implemented, TVN will have to sell at least some of their shares to “Polish businessmen” and that would make it possible for the government to “influence what is going on in that TV”.

And this is important. Because, you know, the media run by foreign forces can harm the Polish budget. Like when they transmitted a press conference of the opposition politician, who stood outside the gas station operated by the government giant Orlen and complained about high prices of fuel. During the broadcast, the prices on a display visible in the backdrop were dropped from 5.66 per litre to 5.51 litre. Such a loss to our Oil giant, and only because of those pesky media who could spend their time wiser, by defending the Orlen CEO, Daniel Obajtek, from the corruption accusations instead, just as TVP does (the prosecution will off course not investigate them, by the way, if you were wondering). But, back to petrol prices. The PiS argument is, of course, that when Donald Tusk was in power, the drivers had to pay more than 6 zł per litre of petrol. But back then the price for the barrel was at about 130 dollars, today it’s nearly half of that. So why high prices?

Could it be that the government is in desperate need of money? The Supreme Audit Office warns, that last year the government used creative bookkeeping at an unprecedented scale to hide expenses. No wonder that PiS is so desperate to silence the independent media, that could make such inconvenient information public. So far PiS politicians can only claim that TVN is an “unreliable source of information” and should learn how to make journalism from TVP (at least according to Marek Suski). So let’s look at how the “proper” journalism, according to PiS, should look like, by watching snippets from a prime time program on TVP.Info where the new PiS government’s program called “Nowy Ład (new order) is discussed” and see how balanced the message is there:

“From the other side, from the side of the opposition, the voices can be heard – It’s hard to believe that such voices are heard, as it’s impossible to find any flaws in that program [Nowy Ład] – but such manipulations emerge, for example, information that as a result of this program the taxes can go up. Is that one of those methods – not only of the political fight but also of the fight with the Polish society” – asks the anchor?

But of course, TVP is not all politics. Here you have a clip of a reporter who encourages viewers to go to work “differently than usual”:

Instead of going to work as a normal human being, he walks out of the building via the underground garage ramp, then he jumps over some street, “practices balance” by slaloming between some roadside poles and so on and so forth for more than two minutes.

That some quality TV, eh?

This piece was written for Britské Listy
Autor of the meme unknown.