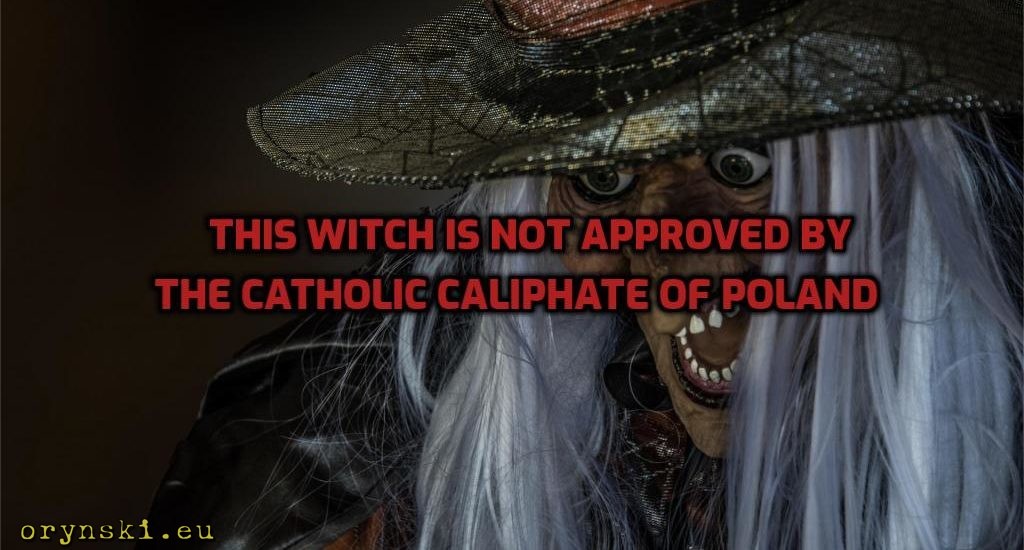 If you need one scene that represents today’s Poland, the recent unveiling of the “renovation” market square in Janów Podlaski will be perfect. After chopping down a little park (94 of the 140 trees that grew there have been cut down), the square has been covered by concrete. In there a new fountain was constructed, depicting Arabian horses, for which Janów Podlaski has been world-famous just until a few years back when the Arabian studs were taken over by PiS nominees and centuries-old institution has been left in ruins. The VIP’s present at the celebratory opening of the market square ( the ribbon was cut, of course, by a Catholic priest) had to hide in the shadow of the nearby building, as in the summer heat the concrete surface of the refurbished market square was unbearable to stand on even for a short period of time… The cost of that renovation was 4 million zł, of which 2 came from the European Union grant.

I wonder why they even take EU’s money? According to Elżbieta Witek, speaker of the parliament, those, who criticize the government should not take “government’s money” such as child benefit or pension. “If I did not agree with the government’s decisions, I would never take anything from such government,” she said. Of course, she lied. She used to be an opposition MP and she was taking her salary as normal. Surely it should work for European Union as well? “It’s Poland here, not a Union” – said Witek during the same speech. Her party colleague turned judge of the puppet Tribunal agrees with her, as he ruled that Poland does not have to observe the rulings of the European Court of Justice. Surely if they don’t like the EU’s decisions, they should not take any money from it?

But what would you expect from such a cynical government like PiS? The leaked e-mails unveiled a scary picture – not only the fact, that they use private e-mails to conduct official business, not only the fact that they are hypocrites (as apart from the e-mails, the hackers leaked pictures and footage suggesting infidelity of the minister in question), but the scariest thing is that they are completely cynical. Everything is seen by the lens of “if it will be beneficial for us politically”. The news about brutal actions of the Belarussian regime was for example deemed by Mateusz Morawiecki as “the political gold for us”.

And they don’t have to worry about it. They know they are above the law. While the opposition activists are being harassed under strange pretexts – you might remember the opposition activists chased by the police across town under the false pretext of them crossing the road on a red light? Well, the PiS MPs cross the road on red in front of the police officers and there is no reaction whatsoever. There are some people who do face responsibility for their actions (or inactions). A producer of the breakfast show in TVP, who worked there for 12 years, had been sacked for not cutting the transmission of the performance of the Slovakian singer Karin Ann, during which she took out the rainbow flag and expressed her support for the LGBT community in Poland.

The group of woman activists from Miłakowo can also get in trouble. As they called themselves “Wiedźmuchy”(~ witches) and sometimes dress as ones, the local council from the inspiration of the PiS councillor and the activist of the Catholic Action is now investigating the matter. They have to look into it, to see “how it is done and if the manager of the local cultural institution (member
of the collective) is cooperating with the local priest”. According to the aforementioned PiS councillor, “dances, shouts and singing of the witches bring to mind satanic cult” and as occultism is bad, something has to be done by it. Those terrible, Satanic dances and singing can be seen in this youtube clip:

But while the alleged witches are getting in trouble with the church, the paedophile priests can count on its support as usual. In Włoszczowa one of the holy masses was in the intention of the local priest who molested little girls. When the outraged husband of one of the former victims challenged the rector about it, he was told that “they also pray for those, who perform abortions, and this is much worse sin”.

But what the rector could do? Even if he refused to pray for his paedophile colleague, there is always a chance that the faithful will find ways to pray elsewhere. On the official Instagram of one of the opposition MP’s, there was a picture of how he kneels outside of the shoe shop with some man. “This man approached me and challenged me to prayer. He probably thought I will be scared, but I accept his invitation. We kneel on the stairs to the nearest show and say our Pater Noster. Unfortunately, when it comes to ‘and forgive us our sins, for we ourselves forgive everyone indebted to us’, he tries to put the name of my party into it. Further prayer makes no sense, as I can see Satan speaking through him. If I haven’t been ready to pray at any moment, I would never learn who sent him. Not everyone waving the rosary is inspired by our Creator. Beware of false prophets!”.

This is Poland, in the XXI century… And if it’s not enough for you, listen to the Children Rights Ombudsman, who protests COVID-19 vaccinations for under-18’s, calling the vaccinations “a
medical experiment on children”. The promotion of religious propaganda and backwards views progresses. And even if you think you can avoid it by taking your kids out of the religious education lessons, their tentacles will reach you anyway. The government prepares for the introduction of a mandatory alternative: if you don’t want a religious education, your kids will have to attend ethics classes, when they will be taught by… the experts from Catholic Universities.

And I doubt that “forgetting to sign your kids in” will be the only option. This will never work for ordinary people. The activists from the Sports associations, on the other hand, might be forgetful all they want. And they are. The 6 person swimming team and now a woman’s champion of Poland in cycling will not take part in Tokyo Olympics, because their sports associations “forgot” to sign them up. That’s a bummer, imagine you worked hard for years to prepare for, what can be, the most important sporting event in your life, only to find that you are not going because some pen-pusher cocked up.

Sadly, similar feelings might be soon felt by the majority of Poles, who worked hard to find their place in the European family only to be deprived of their place in it by the incompetent government, as they seem to be going full steam ahead for the head-on crash with the European Commission, that (hopefully) won’t let it slip this time.

This piece was written for Britské Listy
Picture: Public Domain