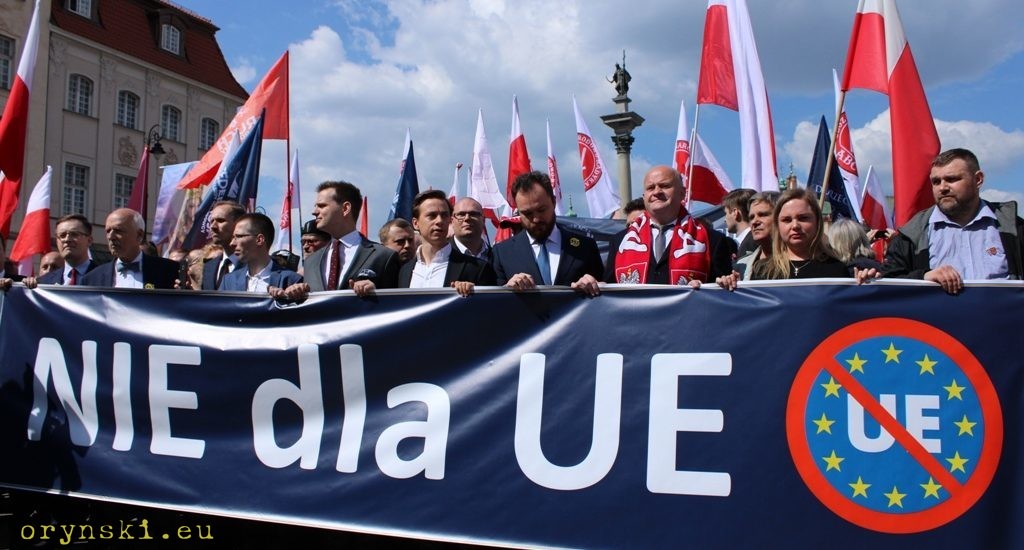 “Down with Jewish occupation” – was a slogan of a nationalist march in Wrocław two years ago, organized by a former priest who turned into anti-Semitic hate preacher, Jacek Międlar. As there was more of this stuff, the city deemed the march to be illegal and ordered its participants to disperse, which they weren’t willing to do and the police had to intervene. This case had found its finale in the court …NOT. Despite the opinion of experts, who claim that the march was full of hate speech and its organizers propagated a fascist regime, the prosecutors decided that those anti-Semitist slogans are mere “a case of accepted criticism showing a negative approach to a certain nationality”.

The state prosecutors, directly controlled by Zbigniew Ziobro, who is known for his warm feelings towards the extreme right, are known for that they are acting more like advocates of the far-right thugs than the public prosecutors. After a group of neo-Nazi activist attacked a photographer during an anti-government manifestation in Radom back in 2017 (see more here), the court found the attackers guilty. Despite that, the prosecutors are willing to appeal, as the prosecutors claim that the victim of that attack, an elderly man, was an equal participant in the brawl along with a bunch of nazi thugs… Watch this picture and judge for yourself…

But at least the prosecutors are still trying to do things by the book, trying to fight the ruling they don’t like in the court of higher instance. Daniel Obajtek is above such petty things. After the court ordered the take over of the local media by PKN Orlen to be put on hold until the impact on the freedom of press will be investigated (see last week’s piece), Obajtek said that “they purchased Polska Press [published of most of the Polish local media – TO] on 1st of March 2021, so before the court ruling. Therefore ruling is invalid, and does not have an influence on either our activities or the validity of the purchase”. The Office of Competition and Consumer Protection supported him, claiming that if courts started running around trying to block the decisions that someone protested then that would be a dangerous precedent threatening entrepreneur’s right”.

Using that logic, if I steal your car and will try to sell it abroad, the car should not be impounded or secured until the court finds me guilty of stealing, as securing the car just because you claimed it’s yours would be a violation of my rights as a used car salesman…

Still, such problems should soon be a thing of the past. As everyone expected (see last week’s chapter) the puppet Constitutional Tribunal found the continuing work of the Citizen Rights Ombudsman to be unconstitutional. As PiS is unable to compromise with the opposition, which makes the election of his replacement impossible, Adam Bodnar was still holding that position 8 months after the end of his term of service. Now he will have to leave his position in three months, regardless of if there will be a replacement or not. This is obviously their aim, as since the Ombudsman is an important constitutional function, they will “be forced” to appoint an acting one… And I can bet you it won’t be someone independent. They don’t even pretend they are trying to reach a compromise, the Sejm (where PiS has a majority) just elected one of the PiS’ MPs as the new one. Of course, he will never be approved by the Senate (where the majority is in hands of the opposition), so everyone knows it’s just playing for time…

PiS attack on the Citizen’s Rights Ombudsman is symbolic – not only because this is the only remaining institution that hasn’t been taken over or at least limited in this or that way by PiS. This is just the other side to the coin that Kaczyński’s party is. It’s a party of losers, cheap dodgers and careerist who had no chance to do something significant in the real world. Because apart from people like the director of Orlen Daniel Obajtek, who would never be able to excel in honest business, so he made it to the top CEO positions in the country by cheating, playing dirty and making political connections, we have people like Jarosław Kaczyński or Mateusz Morawiecki. Both dreamed to be underground anti-communist fighters, unfortunately, the latter was too young and the former was too cowardly to play any significant role in the fight with the communist regime. So apart from inventing stories about their imaginary achievements in the past they pretend to be heroically fighting with imaginary communists of today. But not “their” communists – as in PiS we also have communists, who came to the stage when the totalitarian system was already wobbling, so it’s only thanks to Kaczyński they are able to build the totalitarian regime of their dreams. Isn’t it telling when Stanisław Piotrowicz, former communist prosecutor awarded for his achievements in prosecuting opposition activists, as a judge of puppet Constitutional Tribunal removes the last defender of citizen’s right from his position and is praised in the TVP by the former communists who remained in the highest ranks of the communist party almost to the end?

Some say this is a reconstruction of the People’s Republic of Poland. But surely not the 1980’s version of it. Because the institution of Citizen’s Rights Ombudsman was created by the communist government in 1987. And, unlike PiS, they knew, that for it to work, the position has to be held by someone independent – that’s why they agreed for Ewa Łętowska, a renowned lawyer and academic, to take this post. In that sense, PiS is worst even than Polish Communist Party. For most of the years of the communist regime, the system tolerated small enclaves of freedom – the church, scouting, student’s cultural movement, some parts of the academia, later the youth counterculture (the 1980’s boom for rock and punk music was officially seen by the party officials as the safety valve)… PiS will have none of this. They strike for the total power. That’s why Bodnar had to go. And those, who dared to protest against it were met with blunt police violence.

In the PiS world, there is no place for experts, independent thinking or even honest, decent people (unless they keep their mouths shut and do as they are told). They proved it when every single of their senators left the room when Adam Bodnar, the current (and probably last for some time) Ombudsman was about to provide his annual report. They showed it when Julia Przyłębska, the Kaczyński’s puppet at the head of the Constitutional Tribunal and, at best, a mediocre lawyer herself, accompanied by two former PiS MP – communist prosecutor Stanisław Piotrowicz and blazing-with-hate Krystyna Pawłowicz – admonished Bodnar for that he did not address them with enough respect and humility. For PiS, there is only a place for “our people”. That’s why Beata Szydło, the very woman who, as a prime minister, caused an international scandal why used her speech in Auschwitz tried to scare the listeners (remember those times when it was refugees, not the LGBT people, who were the biggest threat to Poland, according to PiS) has just been appointed to the Auschwitz Museum Council. The other members began resigning in protest, but of course, PiS does not care… At least not about history: some say that Szydło felt the urgent need to become a member after Germany gave a significant financial grant to the Auschwitz Museum…

In PiS Poland, everything that goes, goes because of PiS. The government even changes the direction signs signposting the way to the vaccination posts. Simple message “COVID-19 Vaccination Centre this way” is not good any longer. The centres were ordered to prepare new signs, illustrated with the picture of the prime ministerial office building and his logo, along with those of the Ministry of Health and National Vaccination Program. And if you think that this is something like the reminder that Big Brother is always looking, you might not be too far off:

Adam Szczepkowski of PiS, the mayor of Grunwald commune wrote a letter to the prime minister, in which he informs him about the alarming situation that is taking place in his area: the important positions – like that local councillor – are held by the women, who might be incompetent. How does he know that those women are incompetent? Well, their daughters are lesbians, do you need any more proof?

The recent events in Poland are all very sad. “Meanwhile in Absurdistan” was supposed to be a funny column about goofy things in Polish politics. Somehow it has become a chronicle of the collapse of the Polish democracy and freedoms. That brings an important question: if it’s so bad, why people keep voting for PiS?

Remember Adam Hofman, a disgraced PiS MP and now an “independent social media and PR consultant”? The new investigation carried by reporters from Oko.press and Gazeta Wyborcza uncovered a Polish version of the Cambridge Analytica scandal: it seems that Andrzej Duda owes his re-election not only to massive-scale propaganda pumped by the state TV and Radio and the conglomerate of pro-PiS media relying on government funds to operate but also to the high-tech social media manipulation campaign orchestrated by Andrzej Hofman and his associates.

Over the last few years, the European Union watched Brexit with disbelief. This has also started with widespread online manipulation of the voters. Now we are observing how Britain (especially England) is slowly turning into a more and more authoritarian state controlled by a bunch of right-wing cronies. It seems that the aim of PiS is similar, although the exact path might be different. After Court of Justice of the European Union yet again deemed PiS’ “reforms” of the justice system to be illegal, or, in other words, incompatible with European law and thus invalid, PiS answered by ordering Constitutional Tribunal to investigate if the European Law is superior to the Polish law. Why they want Julia Przyłębska to tell them it is not it’s pretty obvious…

This piece was written for Britské Listy
Photo: Piotr Drabik via Flickr, CC 2.0