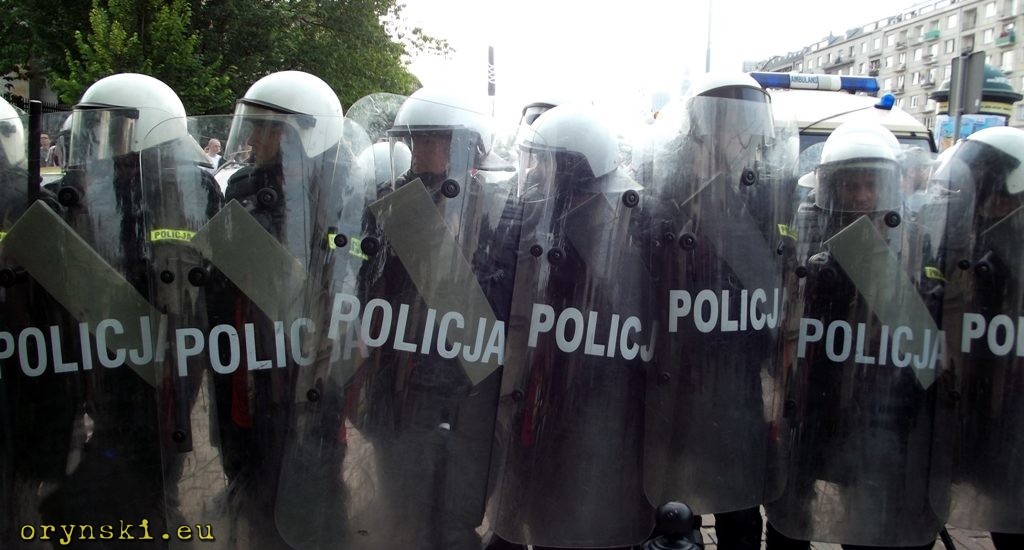 Earlier this year president Duda was praising the work of the Polish Police during the women’s strike. According to him, the police behave in an exceptionally professional way, because “nobody died” during the riots (as he called the women’s strikes last year). He says that as long, as nobody’s hurt it means that the police’s conduct is perfect. The independent media shows that this is not true. The portal Oko.press has recently published a whole series of articles about police brutality against women: broken bones, broken nose, damaged spine are amongst many injuries caused by police brutality. Despite that, no police officers held no responsibility for their actions, as their superiors or the prosecutors are finding nothing wrong with their actions, which protesters see as the police laughing in their faces. Unfortunately, it will no longer be possible to pretend everything is OK.\

In Lubin three police officers tried to detain a man under influence of drugs. In the scary reenactment of George Floyd’s murder, they were kneeling on his back or the neck – when he stops moving, they slap his face and when he comes back to life, they continue to kneel on him. It all happened in front of men’s mother who was the one that called the police for help – she was unable to deal with his son, who was addicted to drugs for many years and hoped that the police will be able to restrain him and safely deliver him to a psychiatric hospital. Instead for 30 minutes, she was horrified to watch the police torturing her son, and when she tried to film it with her mobile, the police took the phone away from her by force.

The public no longer trusts the police, commonly seen as the armed force of the ruling party that enjoys far-reaching protection – and for a good reason. After the police officers in Wrocław 5 years back tortured detained man to death with an electric paralyser (read more here), the murderers enjoyed protection by the government and the investigation was clearly sabotaged (a recent interview with the victim’s parents brings new light on that case) and only the public outrage and pressure from the media resulted in that the killers have been brought to justice, although many think that the sentences of 2 to 2.5 years of prison they received are far too lenient for such a brutal crime. Their colleagues seem to be not to deterred by their colleagues’ fate either, as there were several reports that the detainees brought to the police station when Stachowiak was killed are threatened that they will be taken to “Stachowiak chamber” – a toilet without CCTV cameras where he was tortured to death.

Since this is yet another death of a detainee from the police’s hands, the crowd gathered around the police station in Lubin demanding answers. There was nobody willing to speak with the people, so the atmosphere heated very quickly, the stones were thrown at the building and a garbage bin was set on fire. Police answered with aggression as well, and the whole situation escalated into a full-scale riot. Police had to bring additional units, rubber bullets were fired and two water cannons had to be brought to the location. There were several injured persons on both sides and about 40 people were arrested.

As the situation escalated, police forcibly removed journalists from the site, with special attention paid to Oko.press reporter, who wasn’t even allowed to come to the press conference later (remember? This is the portal that writes about police brutality). Because who needs independent journalists, there is enough media controlled by the government as it is.

The problem, though, is that after the local media were taken over by the government after being purchased by the state-controlled oil giant Orlen (see more here), their quality deteriorates very quickly. “Dziennik Zachodni” for example published an editorial by the newly appointed deputy editor, which, apart from being an utterly chaotic and worthless text, included 39 errors, including a spelling mistake in the author’s surname. It is not clear if it is the new quality we could expect from that paper under his rule, or if it was sabotage from the staff unhappy with their new boss – a party nominee.

But, of course, new government media publish some good texts as well. “Gazeta Wrocławska” for example, published a very nice guide to Wrocław’s restaurant. The only problem was – it was plagiarised from a popular culinary blogger. The paper’s editor apologized: “this material should not be published on our page now and in this form” – he said.

But perhaps the quality of the publication is not an issue, as in PiS’s ideal word, the media would not publish anything. When the chief of the Supreme Audit Office asked the parliament for removing his deputy, accusing him of sabotaging Office’s work when it comes to uncovering the justice minister’s Zbigniew Ziobro embezzlement of the money from the victim’s support fund, the ruling party was outraged. No, not with the fact that Ziobro steals money from the victims of the crime – this is a piece of public knowledge for years now – but with the fact, that the fact that their man in Supreme Audit Office is trying to sabotage the investigation went public.

Speaking of embezzlement, Ryszard Czarnecki, PiS MEP is known for falsely claiming over 100 000 euros in travel costs from European Parliament (read more here) has been spotted amongst the public during the recent Tokyo Olympics. Even residents of Tokyo were not allowed to watch the athletes life, and yet Czarnecki, a sleazy guy from the country halfway across the globe, somehow managed to get to the stadium. The journalist investigated it and they found that he was there as a member of a Polish Olympics Committee. The Committee confirmed but decided not to answer the question of what exactly his role in Tokyo was.

I can’t wait to see how much money he will try to claim for this journey. As his mileage form from travelling to Brussels included travelling from the most remote part of Poland, in winter, in a convertible car scrapped a few years earlier, it will be hard to beat it. But knowing how shameless he is, this time his travel reimbursement form will probably show, that he travelled on a narrow-gauge train to Honolulu to catch a Zeppelin airship going to Tokyo via the remote island of Tristan da Cunha…

This piece was written for Britské Listy
Picture: Piotr Drabik (not directly related to the text), CC 2.0 via Flickr