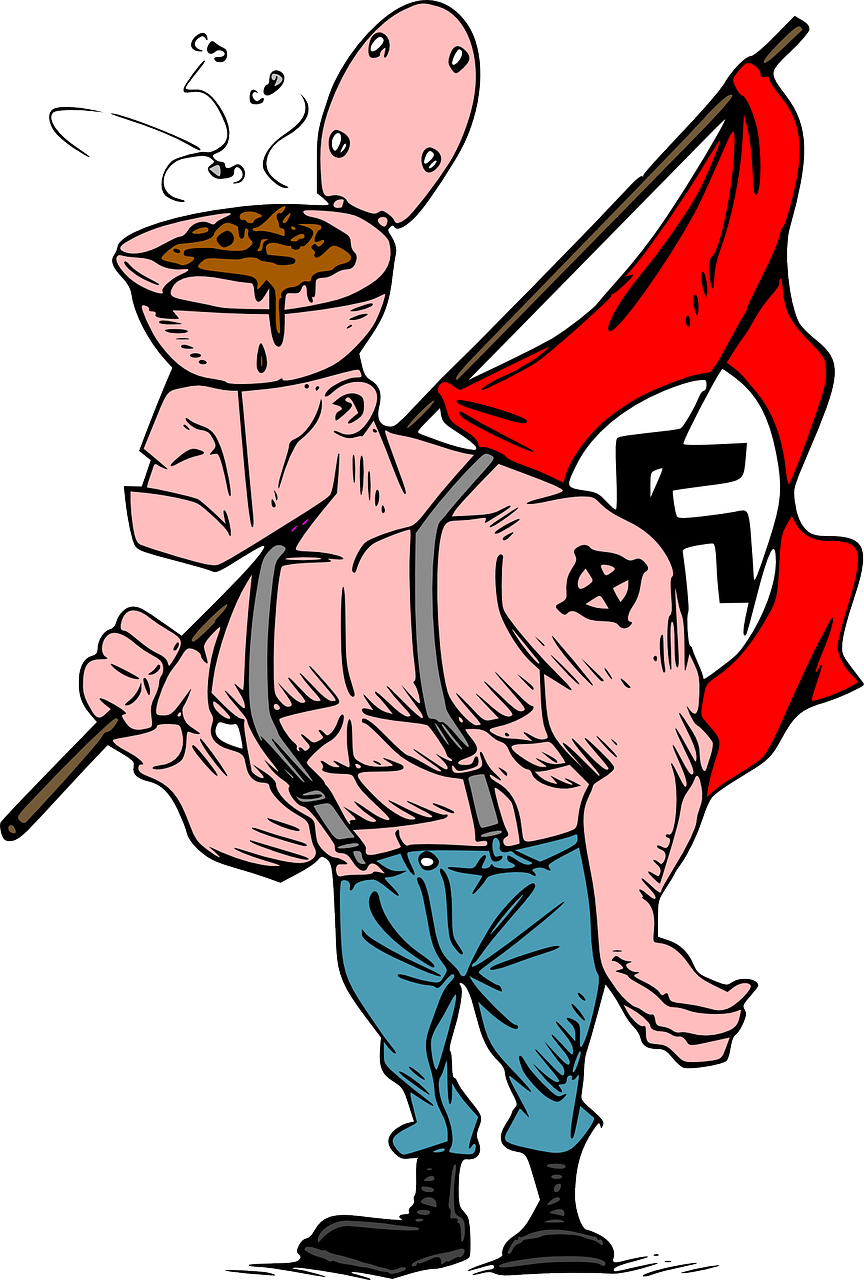 Has the Smoleńsk crash become a cult or religion? If there were any doubts, there should be none after last Sunday. The opposition activists, who organized their counter-manifestation 200 meters further were arrested and charged with “malicious obstruction of a religious act”. QED

But those activists, held by the Police for hours, were not the only danger criminals daring to annoy PiS with their pesky protests. In Kraków people were protesting against the treatment of refugees at the border and some kids drew pictures on the pavement with chalk. The police confiscated the chalk and brought the forensic technicians to establish if that can be considered permanent damage, so the parents of the kids can be charged with a crime.

Meanwhile, the cult of Smoleńsk is still gaining new followers. Paweł Kukiz, for example, joined his friends from PiS in saying, that “organizing political protests on a day of Smoleńsk month-inversary is “perfidious and inhumane”. Another new believer is Monika Pawłowska, former MP of the left who earlier this year betrayed her voters and joined Jarosław Gowin’ party. But she could not do it in the worse moment, as soon after he was kicked out from the ruling coalition, so she followed the smell of money and joined PiS’ parliamentary club. She avoids journalists now, but one managed to catch her signing an attendance list in one of the commissions only to leave the meeting half a minute ago… Apparently, she’s very quick at picking new standards.

She is not the only one who is a difficult one for the journalist. Just look at this interview with a PiS local ally in the regional parliament of Lower Silesia that gave an interview to a journalist regarding a project of Wrocław metropolitan railway that collapses after professionals who managed the railway company has been replaced by PiS. Polish press law requires the journalist to present the final version to the interviewee for acceptance and some minor corrections are allowed (I hated it when I was a journalist back in Poland, but now, being an object of interest of journalists in Britain recently, I have to say I start to see its advantages). You don’t have to read the whole interview, just look at it briefly: in the process of authorization, the politician had demanded the removal of the whole chunks of the interview that could put him in a bad light (look for the bits in italics). Apparently, his understanding of the word “minor” is very different.

For PiS the only thing that matters is the final effect and they don’t care which way they get there. You can see it clearly from the leaked e-mails of Minister Dworczyk that are, of course, still regularly published (and, judging from the reaction of PiS, are real). One of the most recent confirms that that show with the trucks disguised as a convoy from the Polish Red Cross that was sent to Belarus to help refugees (see more here) was from the beginning a PR stunt planned by the government, who know very well that nobody will let them into Belarus.

But the biggest news of the week was the so-called ruling of the so-called Constitutional Tribunal in which so-called judges decided, that European Union is incompatible with Polish constitution. PiS propaganda claims, that such ruling is nothing unusual and that several other countries had similar rulings of their courts, but first, in all of those instances the discrepancies between EU law and local laws were minor and in a specific narrow field (and in most cases were rectified since by changing the local law) and secondly, in Poland the gist of the ruling is that the court, deemed by the EU as illegal due to PiS illegal judicial reforms – that is a concern for the EU only because they are breaking the Polish constitution – claims that it’s not true, and it is, in fact, the EU that is illegal.

It is very peculiar, that sudden love affair between PiS and the Polish constitution. Usually they want nothing to do with it, so much, that when children from one of the schools took part in the workshops about constitution organized by top judges in the country (along with some opposition activists), the headteacher had to be suspended as required by local school ombudsman (the crazy ultra-Catholic lady from Kraków some of our readers might remember from previous chapters) and the Children Rights Ombudsman. It is worth mentioning that this headteacher get herself in trouble before for organizing classes about tolerance during which AIESEC activists, students from Algeria, were teaching kids how to write their names in Arabic…

But, back to the “ruling” of the “Constitutional Tribunal”. This is a bold move by PiS aiming to make it impossible for the ordinary judges to refer to the rulings of the European Tribunals in their work – they do it to circumnavigate illegal changes to judiciary introduced by PiS. But it also means that the Polish government (let’s not be silly, we all know Julia Przyłębska “Tribunal” is just Kaczyński’s puppet show) is undermining the very basics of the European Rules – the fact, that for it to work, the countries have to trust each other to uphold the same values – like the independence of the justice system. Poland cannot remain in the European Union and set it’s own standards, just as traffic would be impossible if people were disagreeing on matters like which side cars should drive on, or if the red light means “stop” or “go”. The rule of law is at the foundation of the Union. Therefore it is widely considered as a final confirmation that the aim of the PiS government is to drag Poland out of the European Union – and this move is supported by right-wing Konfederacja, whose MP even claim (despite obvious facts) that Poland was dragged into the EU against its will.

Of course the European Union can’t stand by and already suggested that funds might be suspended, but PiS is already prepared for that. They already started to tell farmers, that they could get even bigger subsidies from the Polish government and it’s prominent politicians start to belittle EU funds importance “it’s not that much, we won’t starve” says Marek Suski, but does he really mean Poland, or, just like Jerzy Urban, the infamous spokesperson of the communist government during martial law, he really says “the government won’t starve”?

No wonder that people are outraged. Tens of thousands of people answered the call of Donald Tusk and came to Warsaw’s Castle Square to protest. Across the country, more than a hundred other pro-EU rallies took place in cities and towns. Robert Bąkiewicz, leader of the extreme right militias has threatened Tusk to “meet him there” and “defend Poland from the fifth column, formed of misleading and cheated Poles”. There were fears that this might end in riots, but luckily Bąkiewicz and his neo-nazi friends were much less numerous, so didn’t even dare to go anywhere near (but in Bydgoszcz police apprehended a man who tried to attack Radek Sikorski and a local opposition MP with a syringe containing some mystery liquid).

But while Bąkiewicz fascists might not be numerous, they were certainly really noisy – thanks to the generous government grants they were able to buy themselves a really strong sound system, which they used to transmit their speeches and to play patriotic songs in a heavy metal version to disrupt the pro-EU rally. Later a group of younger people followed Marta Lempart – self-appointed leader of the women’s strike – in the march towards PiS headquarters. When one of the participants set up a flare – you know, one of those that are burning by thousands every year during the march on 11th November organized by Bąkiewicz and police never does anything about it – he was assaulted and badly beaten by dozens of police officers. He claims that two police officers stood on his torso and kicked him in the head. You can see how many of the police officers came after just this one teenage boy:

Plot twist: he turned out to be Franek Broda, prime minister Morawiecki’s own nephew, known for being an avid critic of his uncle’s job.

But the most moving moment was when during the rally organized by Donald Tusk a Warsaw Uprising veteran took the mic. A true war hero, she has that annoying habit of being still alive, thus making it impossible for the right to attribute their views to her. After Bąkiewicz was trying to shout over her using his speakers, she lost her temper and shouted at him “Shut your mouth, stupid man. Shut up, you daft boor! I am a soldier, who remembers how the blood was spilled here, how my friends were dying here. I am here to speak on their behalf: nobody will take my motherland from Europe!”

The right-wing media instantly unleashed attacks on her (here, here and many more, one more disgusting than another), but it won’t do them well to try and smear such a legendary war hero.

But worry not, I heard next time Bąkiewicz might be able his own veteran of the struggle in Warsaw in 1944, but nothing can be 100% sure. Traveling to Poland from a care home in Argentina might prove to be too much of a challenge for this frail, old German…

This piece was written by Britske Listy
Picture: Public Domain