This week’s news were dominated by Donald Tusk losing his driving licence. He was stopped when driving over 100 km/h in a village – so in a place where speed limit is 50 km/h only. Michał Karnowski, an editor of a pro-government propaganda outlet is calling for him to step down from politics. This just show how blatant they are, as at least Tusk paid the ticket and accepted the responsibility, which is not something PiS politicians are known for.

And I am not even thinking about those crashes of government limos, that are a recurring topic of that series. No, I am thinking of the situations where the politicians themselves were caught driving badly. The most famous example here was Jacek Kurski – then a PiS politician and today still de facto PiS politician, but acting as a chief of a public broadcaster. Back in 2008 he was in such a hurry put his hazards lights on and started to follow a police convoy, jumping red lights, overtaking on a pedestrian crossing and refusing to stop – the police needed to dispatch two police cars to block his path to stop him, as the convoy was carrying a dangerous criminal and they were afraid someone wants to rescue the prisoner. He stopped but only to claim immunity as an MP and drive away. He is known for his bad driving habit – he was, for example caught driving 157 km/h in the centre of Warsaw. Antoni Macierewicz is another PiS MP known for driving twice the speed limit and refusing to pay tickets, claiming MP’s immunity.

But even more recently in 2018, a PiS MP was stopped for doing 108 km/h in a build-up area (1 km more than Tusk). Incidentally, he forgot to carry his driving license with him and refused to accept the penalty. Another one, caught doing 129 km/h at the place where the speed limit is 50 did pay his ticket and lose his license for three months, just like Tusk, but we never heard Michał Karnowski’s calls for him to step down. Or criticizing Marek Suski, filmed by the journalists when doing over 150 km/h (see here).

But, unfortunately, it’s not just a PiS problem. Of course, they feel they are above the law, but everyone who ever drove in Poland knows, that Poles have a problem with respecting the highway code, especially speed limits. Part of the reason for it might be the fact, that rates of the penalty fines were never amended since 1998, and while 500 zł – the highest possible ticket – was a significant sum back then, today it’s laughable. And the law introduced by Tusk’s government – the one he now felt victim to, when the police officers can take away driving licenses on the spot, which is legally controversial, did little, as there is not enough traffic police on the road. Probably they are too busy protecting Kaczyński’s house or Smoleńsk monument. The courts are also pretty lenient on drivers, and rulings such as this one, when a man who drove his illegally modified BMW with a speed of 136 km/h killed a man on a pedestrian crossing in Warsaw (the victim managed to push his wife and kid out of the way in last second) has been sentenced to nealy 8 years in jail are rather an exception than a rule. But even here the court changed the charges and found him guilty of the lesser charges (causing an accident, rather than manslaughter by driving). In many other cases like that, the blame was shifted on the victim, accused of “intrusion into the road under oncoming vehicle”.

Luckily, recently the law has been changed, giving pedestrians an absolute priority at the crossing. Despite doomsday prophecies from car-centric publicists, even after three months, there was a 30% drop in pedestrian fatalities. And now, as PiS desperately needs money, the rates of penalties are about to change dramatically. It will be much harder, though, to change the mentality of Poles. Breaking speed limits in Poland is widely accepted, sometimes when I drive I feel like I am impeding the traffic and the speed limit is actually in mph, not in km/h. I remember one summer when I was driving regularly between Brno and Wrocław, and while in the Czech Republic I was one of the fastest driving while driving at around the speed limit, in Poland I was one of the slowest – even the trucks that are supposed to be speed limited to 90km/h were overtaking me when I was doing 100. Some desperate Czech even displayed this banner on his house next to the road that entered from Poland: 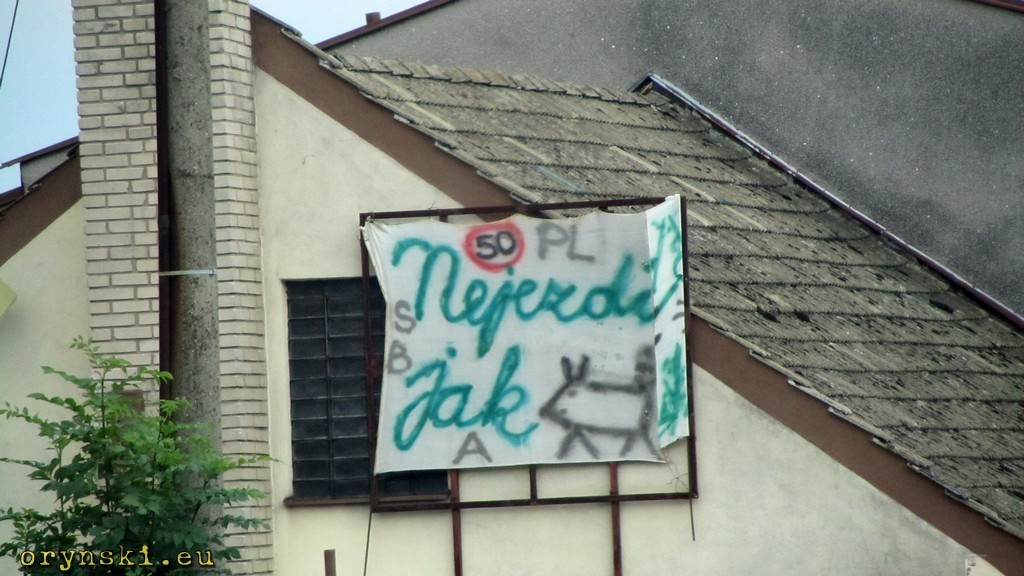 The common opinion on social media is that “Poland should build better roads first, then enforce speed limits” – I can’t see the logic behind that, but the fact is that Poland DID build a lot of good roads recently. I was driving the newly built expressway from Wrocław to Poznań last Sunday, with a speed limit 120 km/h on my cruise control and despite rainy weather, plenty of cars were passing me with a whizz, as if I was standing still…

Until that changes, the Polish roads will remain dangerous. And we have a long way to go. Imagine any other European country where prominent right-wing journalists published a dashcam video on his Twitter page on which he is driving nearly 140 km/h at the road with 90 km/h speed limit and dangerously overtaking another overtaking vehicle using hard shoulder, comments “seems I smashed someone’s mirror” and thinks this is funny?

But the politicians still prefer to be outraged by the imaginary threats, such as migrants “invading Poland” on the border or knife-wielding university professors. Yes, Janusz Kowalski, a politician from one of PiS satellite parties known for not being too bright (after all, he is one of the leading anti-vaxxers in the parliament) accused a government medical expert of threatening him with the knife, while in fact the professor, prompted by a journalist, admitted, that when he hears Kowalski, “the knife opens in his pocket”, which is a popular figure of speech, meaning that “one can’t listen calmly to something”.

Also, other bodies are tackling the more important enemies of the people. State Forests began issuing SLAPP lawsuits against environmental activists who criticize their way of managing the forests (State Forests are known for chopping the record numbers of trees for profit). The Territorial Army created a special unit tasked with combing the internet and tracking the comments that mock or make fun of this formation (a.k.a. “disgracing the honour of a Polish soldier”). Meanwhile, a group of masked soldiers brutally and illegally detained three journalists (including a Czech photographer Martin Divíšek), illegally searching their cameras and phones – all because they photographed an army camp outside of the exclusion zone alongside the Belarus border, which is perfectly legal. An army general made an utter fool of himself when trying to defend his soldiers, claiming that it was all according to the procedures, and two of journalists had beards “which can be meaningful in the condition of limited visibility”. Poor sod either played dumb, or never knew, that the journalists managed to start a voice recorder in one of the phones, and everything, including vulgarities, obscenities, breaking all the procedures, as well as exchanges between soldiers in which they admit they know what they do is illegal, have been recorded.

Even Dunja Mijatović, the EU Council Commissioner for Human Rights, had been illegally stopped by the border guards that admitted that there is no legal basis to do so. When the officials from Human Rights Ombudsman intervened with the Guard’s HQ, they were let through only to be then stopped by a police officer again. All of that happened outside the zone (she was not allowed in), on an open, public road.

Luckily, after Angela Merkel’s intervention with Lukashenka, the number of migrants at the border diminished – although the activist still report several people hiding in the forests on the Polish side. So all Poland achieved is spending millions on building fences and other protections, trampling on the rights of the local citizens and tarnishing even basic human rights of the migrants, breaking Polish and international laws, showing how disorganized they are (crowdfunding actions were organized to provide basic food and clothing… to soldiers deployed to the border as they complained of lack of basic provisions) and all for nothing, as it has been estimated than most of the migrants crossed Poland illegally anyway and ended up in Germany, while those remaining on the Belarussian side are being sent back to their countries after just one phone call from the German chancellor. Andrzej Duda is being cocky and announced that “Poland is a sovereign state and will not accept agreements made above our head”, but it’s hard to imagine what he would want to do in this situation: bring our own migrants to starve them in the woods for willing to live in a normal country? Or, as some people joke, use the army to beat Poles who would like to live in a normal country instead?

But those Poles, who would like to live in a normal country are having it harder and harder. You can’t even listen to a piece of modern music by a leading Polish composer, as it has been censored, because as a part of his opus he used a sample from Jarosław Kaczyński in which he says that “nobody will convince us that white is white and black is black”. But some have it worse: after Maciej Stuhr, a popular actor, got involved in helping the migrants on the border, someone vandalized his family grave. The signs “M. Stuhr is Putin’s Agent” and “murderer of Poles” were sprayed on the monument. Those are the fruits of the raising tolerance for radical right and hate preachers and the fact, that after a public outcry Rybak and Jabłonowski vel Olszański, who co-organized anti-Semitic rally in Kalisz (see last week piece) have been arrested recently does not change much. Especially when a right-wing MP Grzegorz Braun tries to pledge for them so they are released on bail (luckily, he was considered not a trustworthy person by the court – which is also telling, he is an MP after all).

If you don’t want to live in a normal country tho, you can have a good life, like yet another government minister that just has been accused by the media of profiteering on the COVID-19 pandemic by selling worthless face masks, falsifying documents, and corruption.

But you might want to ask: if government members are so busy with making side deals, fighting with the opposition, talking rubbish on TV, harassing opposition activists, and deliberating pointless topics in parliament, who is responsible for actually ruling the country? Well, there is a method to sort this problem. You just need to entrust your institution to the Holy Mary, problem sorted. That’s what a director of Turów Power plant did during his pilgrimage to Częstochowa:

“I, Oktawian Leśniewski, a director of Turów power plant, am standing in front of your countenance in the presence of angels and saints (…), to entrust into your virgin heart Turów Power Plant, (…) Virgin Heart of the Mary, Queen Of Poland, please spread your power, your rule over Your Power Plant in Turów. Let with your inspiration the plant develops for the glory of God, the Church, and the Motherland. (…) Oh, the lady of Jasna Góra, please ensure that your Virgin Hearth is triumphant in our workplace (…) I am entrusting the Turów combinate into the Holiest Heart of Our Lord Jesus, and I am choosing Michael, the archangel as our patron”.

I am out of words, so until next week, dear readers.

This piece was written for Britské listy