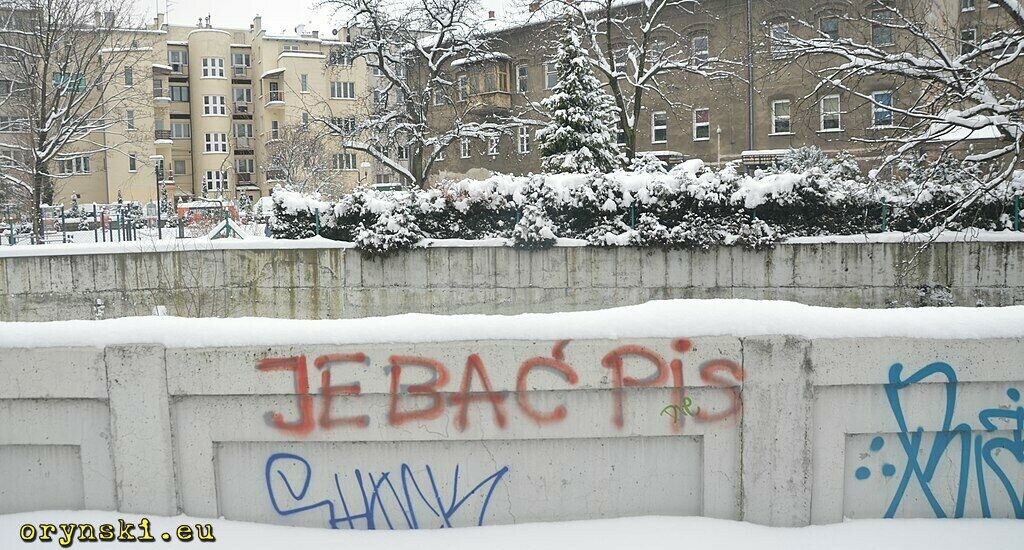 One of my first ever pieces of Britské Llisty, back in 2014, was about how the Catholic Church gets special treatment from the government and how it is giving the church free land and money under some false pretext with total disregard to the law and the fact, that such lands might be important to the local communities. You can read that piece here. Many people pointed to everything that’s wrong there. But if you think something has been done about it, then you must be a new reader of this series.

When one of the members of the commission was accused of breaking the law by granting the church land as compensation more than once for the same claim (the losses to the state have been estimated at at least 3 000 00 zł), Henryk Gulbinowicz, then cardinal of Wrocław, wrote a letter to a chief judge of the district court in Wrocław in which he assures that surely the clerk responsible for those massive giveaways simply made a mistake and demanding that she “would find such a legal solution (…) that would not harm him”. The cardinal argues, that the accused Rafał Ziglewski had not even right to sign relevant documents, so should not be held responsible… 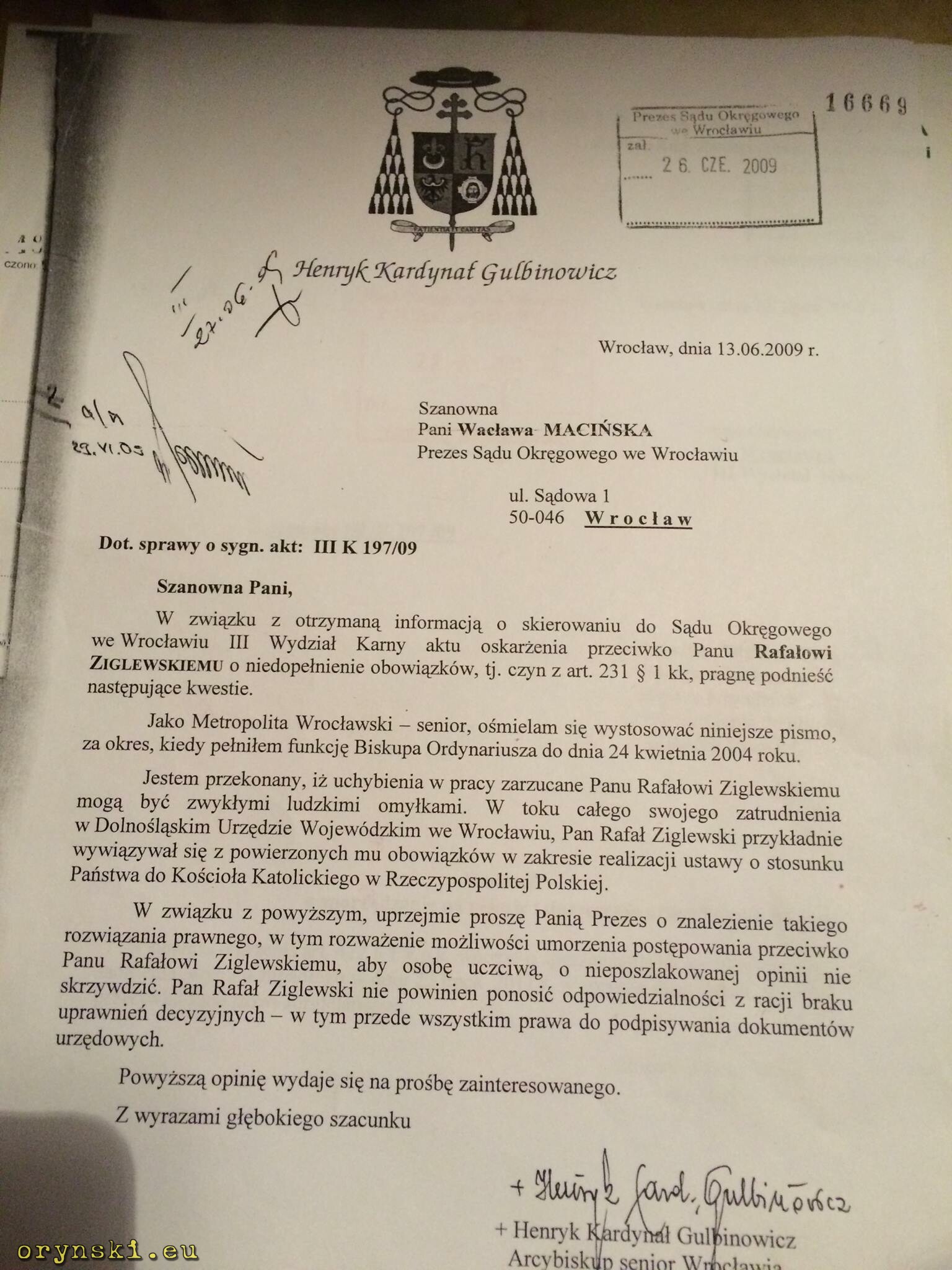 That one thing is constant in Polish politics: the church milks the state as it pleases. The prosecutors just demanded the court to drop the case related to irregularities in “compensations” to the church for the land seized by the communist. As you can guess, the explanation of why the prosecutors would want to drop the case that was going on for a decade is simple – they openly admit the orders came from above. I guess minister Ziobro found “a legal solution” that allows the people engaged in stealing public property and granting it to the church to not be harmed.

It seems the government is always happy to pump more and more money to the church (recently the monks from the monastery on the top of the Święty Krzyż mountain were given the lands that were excluded from the National Park for this). When about 15 years ago my friend told me he feels like Poland was under Vaticani occupation, I was laughing. Now I feel more and more that he was right. Last week I got an e-mail from one of the readers, who felt the need to correct me on my use of the word paedophilia. The reader claimed to be an expert, a member of ČEPEK, Czech and Slovak Paedofile Community (yes, IT IS a thing, see here!!!) and I wanted to explain that I am merely using this word as it is used in Polish political discourse. After all, we even have Government Commission on Paedophilia. So I wanted to provide the link to that institution… but I could not. Is it as it does not exist at all. True, there are press articles writing about it (I myself wrote about it here or here), but the link to the commission itself is dead. Unlike info on any other commission, links to any of the press releases related to this one hosted in gov.pl domain will just redirect you to the main page, the same if you just use a built-in search engine… Check for yourself, I clicked about 25 links so far, none of them seems to be working…

So anyway, while the government is busy protecting the church and throwing a crazy amount of money at it, the really important things are less lucky. The government decided that in the land of PiS happiness, the long-established child helpline run by an NGO, where children can phone in confidence to get psychological help (or other, as required) is no longer required and just cut the funding to it. In a country where 4 children a day try to take their own lives and child psychiatry is in ruins. To be perfectly fair, the government’s Children Right Ombudsman opened his own helpline, but he’s not exactly known for protecting children – unless they are unborn children – and his line failed to gain public trust, which is probably the reason behind the decision to cut funding to the one independent of the government.

But Poles won’t have government taking another important thing away from them, so in a crowdfunding effort the minimum sum required for the line to continue operating – 350 000 zł – had been raised in six hours (and at the moment of writing the target sum of 1 000 000 had been nearly doubled).

But it’s not like the government is not thinking about the children. On the contrary, they are really thinking about their future. One of the primary schools in Zielona Góra invited Łukasz Mejza – a deputy minister mostly known for trying to scam parents of children with the incurable disease by selling them some quack therapies (see here) – to talk to the children about his job. I am all for career days in school, and I can see the logic to this: if children learn how to scam others early, they might have a brilliant future in Poland ruled by PiS. Meanwhile, the minister of justice is working on a project aiming to make divorces – especially for marriages with young children – more difficult. Because you know – FAMILY is the most important thing. Even if the parents hate themselves. As long as they are of the opposite genders, that is.

But divorce might be less of a problem if the parents simply die. Oficial data estimate that at least 100 000 Poles died of COVID-19 so far and still the government is doing nothing about it, scared to anger their electorate – many of PiS voters are anti-vaxxers. 13 of 17 members of the medical council resigned in protest, pointing out that government ignores their scientific advice. There is a joke going around, suggesting that this is part of a plan:

But seriously, the economical situation is becoming problematic. As we wrote last time, rising prices are becoming a really big problem for many entrepreneurs. My Twitter feed regularly shows me new small companies – family-run shops, car washes, bakeries, etc. – that announce they have decided to close the business due to rising prices and unfavorable changes to the tax system. Donald Tusk met an owner of a small bakery to talk about his problem, and a snippet from that conversation had been used by TVP in yet another blatant propaganda material. You don’t have to speak Polish, just check this out

According to this, when Tusk asked the baker what he will have to do – make some employees redundant or raise his prices, this choice is the only thing Tusk has to offer. The material consists of some cherry-picked snippets of utterances of Tusk and other people that support the thesis promoted by TVP “experts” who keep repeating that, UNLIKE THE CURRENT GOVERNMENT, Tusk only wants to make Poles poorer. The material is utterly idiotic, but this is not the point. Just look how this question (“make redundancies, or raise prices?”) are repeated in this material several times, but you can also look at the frames with the angry face of Tusk, or his clenched fist and you’ll see it’s not aimed at the intellect of the viewer, but it aims to act on the subconscious level… The message you are expected to get is: It’s Tusk’s fault that everything is more expensive because he is evil.

What fascinates me personally is the easiness how PiS switches between blaming former governments for its current problems or blaming the current president of Warsaw for the problems caused while this function was held by Lech Kaczyński – the leakage of the sewage to the Vistula river, that happened a few times in the recent years is often used by PiS propaganda to show Rafał Trzaskowski as an incompetent president of the capital city, but experts agree that the repeating leaks are due to design flaws in the sewage pipes constructed under Lech Kaczyński.

But at least we do know what is going in the army, what’s its inventory, how many weapons the Polish army has, and everything. And so do Russians, Chinese, potential terrorists, and pretty much everyone else, as the full inventory report had been leaked into the internet. The army official stand is that there was no leak, as the information was already available in the public domain. But the military police investigate the matter to find “who’s responsible for making this data available in the public domain”. So surely not everything is right?

Meanwhile, the army is still busy on the Belarussian border. Journalists or humanitarian organizations are still not allowed to report from the border zone, even though the High Court just voided the ruling of the lower court regarding the journalists working for TV channel Arté and French press agency AFP arrested in the zone by the police. According to the High Court for someone to be guilty of illegally entering the forbidden zone, the zone itself has to be legally established, and the zone of the Belarussian border had NOT been established in accordance with the Polish law, so the journalists are not guilty. Despite wintery weather, there are still people trying to get into Poland and the local activists are still busy helping people stranded in the frozen forests. But this is nothing close to the scale we have experienced in autumn (there are no new flights into Belarus and the Lukashenko regime offered some of those people a chance to fly back home), and for those who still remain in Belarus the weather is not encouraging any attempts to cross, so I guess the things will remain less or more calm at least till spring. But if we believe one PiS MP, the fact that the situation on the border has relatively stabilized is thanks to the fact, that she brought relics of Saint Andrzej Bobola to the parliament’s chapel.

But at least the Polish Humanitarian Action is now safe. After its chief and an opposition MEP Janina Ochojska sparkled outrage on the right by comparing the government and the functionaries responsible for the humanitarian crisis to war criminals, the deputy interior minister Maciej Wąsik reported her to the prosecutors. In solidarity with her hundreds of people self-reported themselves to the prosecution office, pointing out that they also consider actions of the Polish army and the police on the border to be a crime against humanity. On the other side, PIS MEP Anna Zalewska announced that she will not get involved in any humanitarian programs created by Janina Ochojska. This is actually good news, if we remember that apart from totally destroying the Polish school system as a Minister of Education, Zalewska is mostly known for that she allegedly knowingly used money stolen from Polish Red Cross to found her election campaign.

But as we are talking about charity, it is great to see that despite the inhumane actions of the Polish government, the Poles are rushing to help refugees. The charities helping on the border receive generous donations, and people all over the country donate items or help the refugees settle in Poland by offering them help, language lessons, helping to deal with bureaucracy, find a job or a place to stay… Even in my social bubble – my Facebook feed is filled by friends organizing some donations or trying to find help to refugees in crisis. Even IKEA offered paid apprenticeships for refugees.

Meanwhile, my right-wing social media contacts are outraged with the youth after a video emerged of young people enthusiastically dancing to a song with lyrics including “FUCK PIS” doing their traditional high school ball 100 days before matura exams. While it can be discussed if that was appropriate, if I was from PiS I would rather worry about the fact, that somehow videos of young generations enthusiastically PRAISING the ruling party are nowhere to be found…

This text has been written for Britské Listy
Picture: Silar via Wikipedia, CC 4.0