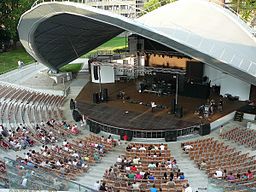 There used to be a time, when Festival of Polish Songs in Opole was exciting. This is the place where biggest Polish hits were born, such as Czesław Niemen’s “Dziwny jest ten świat”. For the first 50 years Opole festival was one of the most important events in Polish music industry. It was cancelled only once, in 1982, after introduction of Martial State in Poland. In new Poland, festival was slowly loosing its impact, with public turning away to more modern events such as Open’er. Also, with the birth of the commercial media after 1989, Opole, that was a flag event thanks to patronage of state owned TVP, had to face the competition of independent events organized by the commercial media outlets. In recent decade Opole became a place where outworn stars go to shine this last one time, as the competition for young artists also became an obsolete format in the times of X-factors and “Poland got talent” shows…
But now we have a new government, who promised that Poland will get up of it’s knees and be brought back to it’s former glory. As a part of this plan, Kaczyński’s bullterier Jacek Kurski has changed public media into propaganda tool compared only with what it used to be during the darkest time of the communism. Some say it is even better than back then and compare it to the state media of North Korea! One of the biggest successes of Jacek Kurski is the fact, that Opole festival is again at the mouth of everyone in Poland. But the devil is, as usual, in detail.

The plans for this year’s Opole weren’t revolutionary in any way. Some stars that are entertaining generations of Poles, a chance to shine again for some slightly forgotten starlets and all that sprinkled with a bunch of young generation artists. The biggest events was to be a concert to celebrate 50th anniversary of the stage work of Maryla Rodowicz, who’s position on the Polish music scene can be compared to that enjoyed by Karel Gott in Czech Republic. Maryla Rodowicz would never stay on the top for so many years if she was afraid of the younger generation musicians, she is known for not being afraid of experimenting with them. She is open to participate with pretty much anyone, including artists from Disco Polo genre, widely considered to be a synonym for bad taste. But this concert was to be something special – you celebrate your 50th years on the stage only once. This time you don’t have to bend to the lowest common denominator in order to entertain masses. Such concert is only about you, therefore Maryla Rodowicz invited to participate in the show several artists that she values the most.

Unfortunately, Jacek Kurski seemed to be not happy with her choice. And the fact that he seems to be really liking Disco Polo (he can be seen clapping his hands and dancing from 2:01 of this movie) has nothing to do with it. He was reported to say that a singer Kayah, invited by Maryla Rodowicz to her benefis, will “sing in Opole over his dead body”. Why? Kayah openly supports opposition and participates in anti-government rallies.

As the message spread, another singer invited by Maryla Rodowicz, Kasia Nosowska, announced, that in protest against excluding artists based on their political views, in solidarity with Kayah she is pulling out of Opole as well. The situation has became awkward, but Maryla Rodowicz would not last 50 years on stage if she did not knew how to cosy up to the politicians. She went in person to TVP headquarters to negotiate and she even agreed to record a little clip together with Jacek Kurski, in which she assured viewers, that there is no such thing as censorship in the public TVP:

And everything looked OK. There is no censorship, concert is going to go ahead as planned… Except for that someone from PiS had to say one word too much, accusing Kayah and Nosowska for being a drama queens and causing all that situation. They were suggestion that they were pressured or paid to do so by the opposition.

That was the last straw. Kayah and Nosowska announced that they won’t go to Opole anyway, as they don’t let anyone make fool of them. They were soon followed by other artists that were to participate in Maryla Rodowicz benefis. Also Andrzej “Piasek” Piaseczny, who was to celebrate his 25th anniversary decided to cancel his participation. Other artists followed, including Maryla Rodowicz herself (although it has to be said that she was also hit by a death of her mother). Pretty much everyone pulled off, from biggest stars like Kasia Nosowska, through younger artists like Michał Szpak to those, who were to compete in a concert of premières. Even the director of the concerts and compère Artur Orzech pulled out, and the city of Opole itself followed very shortly.

Jacek Kurski said that accusations of censorship is a lie and fake news. He accused opposition of playing on the death of Maryla Rodowicz’s mother, yet in the same interview he did not hesitated for a moment to use recent death of another legendary singer Zbigniew Wodecki, as he came out with a proposition to replace Rodowicz’ concert with the concert dedicated to Wodecki, despite objection of his closest family and a fact, that he refused to play at Opole festival just a few months ago.

Jacek Kurski in his interview in his own television, boldly accused mayor of Opole of destroying Opole festival and disgraceful actions, that will end with not only political, but a financial responsibility, and said that he already has a few cities that want to take over organization of the festival, and that mayor of Opole will come back to TVP begging for the return of the festival to his city. As per artists, Jacek Kurski said, that they were misinformed, and the scale of boycott is not that big, as while 18 or perhaps 19 artists indeed boycotted the festival, another 100 are just people who after failing to get any recognition as artists, try to break into the media this way. According to him, the whole attack of Opole is made by a well known forces, that can’t stand the fact that after election of 2015 are unable to control such events, and facing the fact, that Opole was to become an enormous success, they decided to destroy it.

He stressed again, that there is no censorship in TVP, except for the situation when religious feelings are offended. This explains why there was one band that was unable to boycott Opole festival. Dr Misio were kicked out of the premières competition as theirs song was criticizing Catholic Church. Their videoclip, in which band members were dressed as priests and the church is shown as purely moneymaking machine. This clip was deemed “unsuitable for broadcasting”, so you can watch it on youtube:

The only other significant artist who haven’t joined boycott of Opole is Jan Pietrzak. This 80-years old satiric and former presidential candidate enjoys his revival. He became one of the PiS favourite artists after coming back with vulgar jokes about former president and politicians of the previous government. He enjoys not only popularity, but also a shower of money. A foundation ran by his wife, that aims to promote “patriotic values in culture” recently received 500 000 zł from state controled companies and institutions. The rest of Poles do not value Pietrzak humour and believes, that he failed to come up with anything funny for decades. He proved him wrong by claiming, that Opole festival was cancelled, because mayor of the city did not wanted to see Jan Pietrzak performing there.

But is it Opole festival really cancelled? Mayor of Opole is already talking with other media companies about organizing festival later this year. There are rumours that Maryla Rodowicz might have her 50th celebrations during second of the big Polish festivals – in Sopot. She was also invited to Woodstock, an open-air festival organized by Jerzy Owsiak as a big thank you to all the volunteers participating in Wielka Orkiestra Świątecznej Pomocy (more on WOŚP and it’s relation with PiS government here: https://blisty.cz/art/85336.html ). Meanwhile TVP claims that LIV National Festival of Polish Song in Opole will take place in Kielce, despite protests of the local people and stand-up artists, who are afraid that in order to make space for Opole will be kicked out from Kielce amphitheatre, where they host annual cabaret night.

But the mayor issue with organizing Opole festival in Kielce is to find artists, who would like to participate, and at the same time be able to gather some audience. I am afraid that biggest hits of the PiS-supporting artists, such as “If we had four Ziobro [minister of justice in this and previous PiS government], Poland would be good!” by Andrzej Rosiewicz:

or one of the biggest hits in Radio Maryja, “Father Tadeusz [Rydzyk] like Prometheus”:

or even hymns for president Duda sung by wider unknown Emilia Golaszewska:

might not be sufficient, so it’s very likely, that LIV National Festival of Polish Song in Opole in Kielce will end in disaster, just as Military picnics failed to compete with WOŚP earlier this year.

This piece was published in Britske Listy.
Picture by krysi@ [CC BY 3.0], via Wikimedia Commons

3 Replies to “Meanwhile in Cuckooland 27”