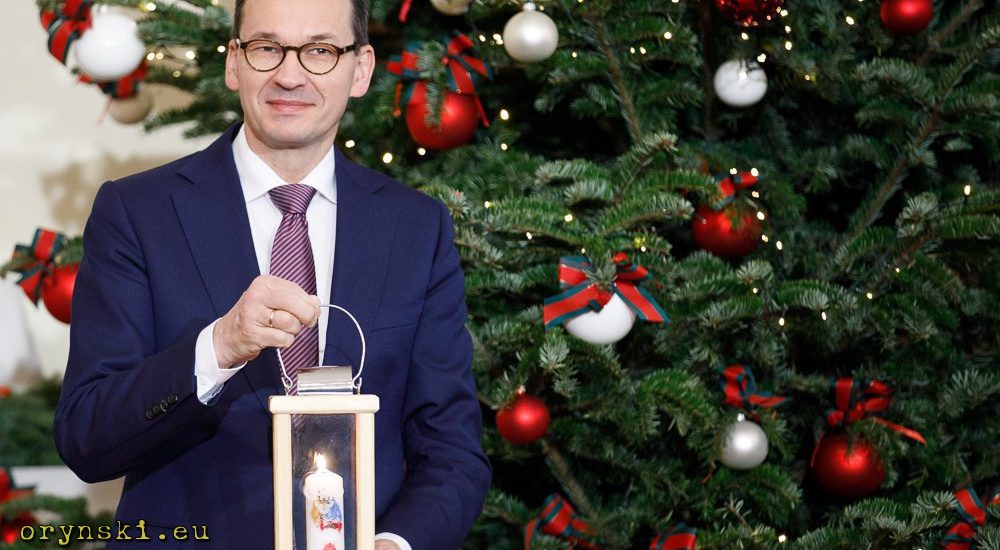 Christmas have passed and the year is drawing to close. But it does not mean, that things are slowing down in Poland. The government vehicles escorting VIP’s still trying to beat US army in the number of crashes. There is no lack of local absurd situations. PiS councillor, for example, is outraged with the city of Warsaw’s Christmas poster as there are stars and moon crescent on it, and everyone knows that crescent is a symbol of Islam, so it’s a proof, that leftists are trying to steal Christmas from the Christians. A city of Gdańsk by a mistake sold a plot of the land with a railway siding leading to the steelworks, thus cutting the huge industrial business from the railway network. In Silesia a bus driver picked up a roadkill deer from the ditch and was carrying it on the bus, claiming that “there are no rules that prevent him from doing so”.

In the wider picture, the waves made by the climate summit have also not settled yet – and, alas, most remembered things are idiocies spread by Polish leading politicians. President Andrzej Duda, for example, recommended some reading materials on his Twitter. An anonymous blog entry in which climate change was denied and it has been suggested, that Poland is unfairly blamed for all the pollution that is, in fact, emitted by Germany, and all of this is just a part of a conspiracy run by European Union, a.k.a. IV German Reich or the United Soviet States of JEWrope. He later admitted that he hasn’t really read the text before twitting about it. Which helped to fix a dissonance between what President recommends and what Minister of Environment says. As in the blog entry promoted by Duda, it has been written, that CO2 is actually harmless, even friendly gas. Meanwhile, the minister blames ecoactivists protecting Białowieża forests, pointing out that due to their action, the fallen trees are left in the reserve to rot there, and when they rot, they emit methane and carbon dioxide. So it’s actually nature that is responsible for global warming.

Meanwhile, the government’s love for coal driven energetics is to cause some problems. With the prices of green energy falling and eco charges imposed on the polluting plants, the price of electricity in Poland, that makes most of it from coal, has to go up as much as 40 to 80%. That would hurt PiS a lot in the year of multiple elections, so they swiftly promised, that the average citizen won’t notice the hike in energy prices and promised to pay some compensation. There was, of course, an issue of where to get money for those compensations, but that was solved quickly by government ordering those nasty, greedy energy companies to chip in and compensate customers for the price hike. The companies are mostly controlled by the government so they sat quiet (except for one guy, who dared to say media, that it is not sure what will happen, but he was promptly sacked). And when everyone in PiS thought, that the fire has been put down, the energy ombudsman stepped in, asking, that if the energy companies are able to save enough money to pay their customers compensations for the higher energy prices, why they need to raise the price of electricity in the first place?

That brought the situation back to the square one, but the government promptly came with another solution: compensation to the customers will be paid from the environmental charges paid by most polluting power plants. You know, the money that is supposed to help switch energy production from the polluting sources to green ones. In Poland, instead, this money is going to be used to compensate customers for that they have to pay more for the polluting energy made from coal…

In case you wondered, why the electricity price is to go up so much now, the answer is, of course, simple, and well known: the previous government is to blame.

Anyway, the government managed to save us from machination set up by Donald Tusk and his team. And who cares that the solution reminds the famous symbol of a snake eating its own tail? After all, in Poland, such things are not unheard of. In Kraków for example, local football team Wisła owes over 5 millions zł to the municipality. What is their solution to the problem? They proposed that the city becomes the club main sponsor. That way the club will get additional income, from which it would be able to pay the city back. Ingenious, isn’t it?

The city of Rybnik also has some financial difficulties. They are to lose 2 million worth of European grant, as the special courier service offered by Polish Mail needs 5 days to deliver 24 hours service parcel, so Rybnik’s documents, along with some from the other cities, were delivered too late.

Luckily, there are some in this country that doesn’t have problems with money. A media company that publishes pro-PiS magazine “Sieci” was just able to obtain 51 000 000 Euro loan, that would make it possible to buy Radio Zet, one of the biggest Polish commercial station. Some could be shocked how such a small company can be able to get such a gigantic loan, but if we remember, that the loan was offered by the government-controlled bank PKO, everything falls in place. This is not the only controversial decision by this bank recently – they have also suddenly cancelled all bank cards with the logo of Wielka Orkiestra Świątecznej Pomocy, a charity chicaned by PiS, despite that PKO was supporting the charity since 1999.

Meanwhile “Sieci” works hard to earn their trust from the government. They have published an interview with Adam Glapiński, chief of National Bank of Poland, in which he says that the attacks on him and institution he heads are a conspiracy, aiming to undermine Polish sovereignty by taking us into the Eurozone. He refers of course to the corruption scandal in the Financial Supervision Authority (see here), which drew attention to him and the institution he runs. Recently Gazeta Wyborcza investigated closer the case of his so-called “ladies of the court” – his two close assistants, a blonde ladies, despite not having relevant qualifications, have made an astonishing career in National Bank of Poland. One of them is paid 65 000 zł per month, which is a shocking sum if we remember that previous chief of the bank was earning only 57 000 zł…

No wonder that something has to be done about that. The government moved to counteract, trying, as usual, to shift the blame to the previous government. They have arrested Wojciech Kwaśniak, a prominent official from the Financial Supervision Authority. They try to frame him into being part of the SKOK financial affair – the biggest financial scandal of recent years in which PiS was syphoning money out of the saving banks’ system. Kwaśniak, who barely managed to survive after being brutally assaulted by a hired muscle, is now being accused of cooperating with the very people who put the price on his head for that he was investigating their wrongdoings. According to the minister of justice Zbigniew Ziobro, he should blame himself for that he was assaulted, as because he was not working good enough, he “emboldened criminals”. Grzegorz Bierecki, a PiS senator and a brain behind the SKOK affair, who still has not faced any responsibilities, went even further saying that “it’s not always the case that man beaten by the bandits is a good man”.

As usual, PiS also tries to cover the scandal with yet another attack on Donald Tusk. An interpreter, who was assisting Tusk in his conversation with Putin shortly after the presidential plane crashed in Smoleńsk has been summoned as a witness. The investigators hope that she might be able to help them prove, that Donald Tusk is a traitor, who in conspiracy with Russia assaulted Polish president. Apart from how absurd those accusations are, this poses a significant issue, as interpreters work strictly under confidentiality and so she is being put between the hammer and a hard place: she is either to refuse to answer questions or to break her confidentiality agreement…

And people were getting in trouble for much less than that. A journalist from a local radio station, for example, was punished for playing a listener’s opinion, in which he calls president Duda “a figurehead”. She was not only banned from running live shows but also reported to the prosecution for the crime of offending the head of state. And with the prosecution being controlled by minister Ziobro and his subordinates, it seems that one might be sure, that they will do everything to make her an example. After all, the state prosecutor, that should be apolitical, proudly brags on live TV that he kicked out teenagers from a tram because they were criticizing Lech Kaczyński and father’s Rydzyk television station:

You don’t even have to criticize PiS to get yourself in trouble. It is enough to be able to do something well. Examination papers were for many years printed by a printing works owned by the army. The state was paying 34 000 000 zł for this service. In 2017 a private company from Częstochowa offered to do it for 8 000 000 less and won the tender. As a result, it had been harassed by the prosecution. The military printing works accused its competitors of rigging the tender, and the police entered it’s premises, seizing paperwork and arresting its employees. The documents were then leaked to the military company. Long story short, tender for the next years was won by the military company again, who suddenly turned out to be able to do the job for 17 000 000 zł. Meanwhile, the legal problems of its competitors are predicted to last for years…

And so it is in Poland today. As I wrote before, there are those equal, and those more equal. For example, when police officers tried to strop a luxury car going a wrong way in the one-way street, a driver came out of it and in an aggressive manner informed him that it’s Jarosław Kaczyński’s limo and threatened to sack the policeman. After phone calls “from the very top” the officer was instructed to let the car pass. He is no longer working in the police. He says he wanted to quit anyway…

Luckily, there are always courts. Those are still quite independent, despite government attempts to take them over. And so to the everyone’s joy, there is no longer Kaczyński street in Warsaw, after the court ruled out, that the changes in street names forced by the government, despite fierce opposition from the locals, were illegal. So there is still some hope.

And that came just on time. Because Christmas needs hope. But there is always also place for some family fun. Prime Minister Morawiecki tried to share his family atmosphere and posted a picture on which he lifts his son in order to help him dress a Christmas tree. It looked a bit weird, as his son is apparently too big for that so the only result was widespread ridicule and stream of parodies. Because Poles, no matter what the circumstances are, are always for a good laugh.

With the new year coming, I wanted to wish all readers of Britske Listy that they have no lack of opportunities to laugh in 2019. I just hope that it will no longer be at Poland’s expense…