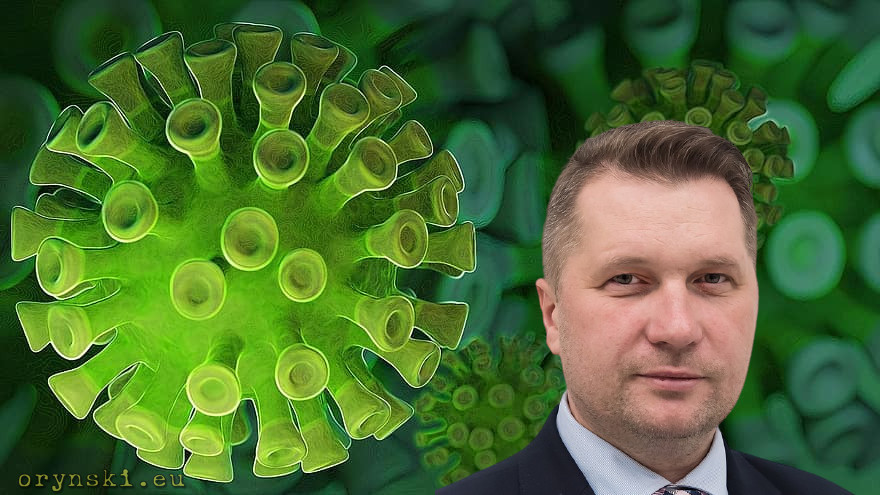 Remember Przemysław Czarnek, Education Minister to be, one of the main heroes of the last chapter of this series? Remember, how he announced that he has been infected with COVID-19? Well, there is an update to this story. Just before he has found out, he had been visiting his granny in the hospital. Of course, hospital visits are now illegal, but would you be so naughty and refuse that right to a PiS politician? You can always say that those were exceptional circumstances, and therefore breaking the law is OK, and that everyone else would be treated the same. Which would be of course a lie, because, as cautious readers of this series already know, the PiS politicians are not treated in the same way as the other people. “My pain is better than yours”, remember? But for once, I am happy that not everyone is treated like a PiS politician here. Because after Czarnek’s visit to the hospital, 90% of patients in the ward she is on tested positive for COVID. Most of the staff are also quarantined. Just imagine how the epidemic situation would look like if everyone was allowed to ignore the rules as they please…

Meanwhile PiS politicians of course deny, that they got special treatment. Like Beata Szydło, after it has emerged that her family rents a forest lodge from State Forest for mere 388 zł per month. Allegedly this is not a special treatment and everyone can rent a lodge as well. I made a quick internet search to check that, and I found that indeed, State Forests now offer accommodation in their lodges. Unfortunately if I wanted to stay in one of them, I would have to pay 100 zł per bed per night. Some discounts are available for long term hire, but in no way I could get the price to the level Beata Szydło’s family got… But perhaps it’s good. After all, it can be a very dangerous place. Forests are full of hunters, and they have recently again shot someone – this time a woman driver that brought them there, who was sitting behind the wheel on her van. …

But let’s go back to the most important topic in hand. And the most important thing is for everyone to observe pandemic safety rules. And here we have the problem with right wing Konfederacja MP’s, who refuse to wear the masks in parliament, which ended in a big row. Konfederacja, that is actively seeking new voters on the right, openly support anti-mask activist and pro-epidemics movement. Their one-man think tank, Sławomir Mentzen who tries to distance himself from his openly tinfoil-hat colleagues and poses as independent intellectual, recently informed his twitter followers that WHO made an u-turn on lock downs. Which was of course not true – he just forwarded a tweet of someone, who didn’t read an interview with one of the WHO experts carefully and haven’t noticed that the expert said that there are some instances when lock downs make no sense – especially if other ways to tackle the virus are not implemented. So much for Konfederacja intellectual backroom.

Their hypocrisy was also pointed out, when Krzysztof Bosak was photographed in the shops wearing mask – which he refuses to wear in parliament, shouting along with his colleagues about how this is an attack on his freedoms…

Konfederacja stand on face masks was strongly condemned by the ruling party. And with the new law, ordering everyone to wear face mask when in public – even on the street, government announced “zero tolerance” policy. Kaczyński, of course, is above that. And everyone knows their place. When Kaczyński, during the ceremony of swearing in the new government, refused to wear gloves and tried to shake Andrzej Duda’s hand, the latter took out his own glove:

But at least he refrained from kissing his principal’s hand.

Later Kaczyński decided that he cannot be bothered with wearing the mask as well:

Some say that this was before the new rules were implemented, but just recently, Kaczyński ignored them again. But apparently this is OK, because while presenting a right wing publicist with some award he was fulfilling his duties as politician, so he was at work. And apparently you don’t have to wear your mask at work. As long, as you’re Kaczyński. Or have time to go to court – and as we have learned since March, forcing people to wear masks, however sensible thing to do, has no legal basis without the state of emergency… Luckily for retail employees and other customer-facing jobs, you have right to refuse to serve customers who don’t want to put the mask on.

But who knows, maybe Kaczyński is indeed in different situation? Perhaps PiS possess that NASA-developed virus-busting technology? Apparently this is already available, if we believe one priest from Nowy Targ who told his flock, that they don’t have to wear masks in church, as it has been fitted with system designed by NASA that “kills 99.9% of all bacteria, viruses and fungi, and prevents contagion between people”. Apparently this is designed in the technology of “photocatalysis (UV-C rays) and oxygenation with titanium oxide”…

Meanwhile Disciplinary Chamber of the Highest Court (remember? The one deemed illegal by legal experts and ordered to suspend its activities by European Court of Justice) suspended immunity of one of the judges. She is accused of taking a mobile phone as a bribe. But could the real reason be, that she sued minister Zbigniew Ziobro for slander and won, or that she openly opposes changes to judiciary introduced by PiS?

The fact is that PiS’ “reforms” to the justice system resulted in Poland being treated as pariah in the European legal world. Rafał Gaweł, an activist and creator of “Centre of Monitoring of Racist and Xenophobic Behaviour”, accused of money embezzling had been just granted political asylum in Norway. Despite the fact, that he was first found guilty by the court even before PiS took power. His crimes were considered serious enough to warrant 4 years of prison time. He was doing everything to avoid jail time, including claiming that he is persecuted because he is a member of LGBT community (despite having wife and a child). But apparently Norwegians decided that, criminal or not, he has no chance for a honest trial in Poland. This is not the first time in recent years when courts in other European countries question if Poland still has independent and fair justice system and refuse to send criminals over, but this is the first time since the fall of communism when a Polish citizen was granted political asylum…

And I guess Rafał Gaweł won’t be the last to leave Poland because of PiS. Especially young people are fed up. After students of University of Silesia in Katowice reported one of their lecturer for her homophobic and intolerant rants, not much is happening with their complaint. But a lot is happening around it, as the lecturer in question, Ewa Budzyńska teamed with ultra-catholic legal organisation Ordo Iuris and accused them for defamation. Since then, they are given treatment by the prosecutors that can be only described as harassment: dozens of students were interrogated for hours at the time in May. Now they are ordered to hand in their class notes from two years ago.

No wonder, that when the state supports homophobes so openly, Poland is now considered to be a country where LGBT community is persecuted. This is why Facebook refused to roll out LGBT Coming Out stickers for their users in Poland. They don’t do it in places, where such people could be targeted or in danger because of their sexual orientation. Poland is now on the list along with Afghanistan, Algeria, Azerbaijan, Bahrain, Bangladesh, Belarus, Bhutan, Brunei, Djibouti, Egypt, India, Indonesia, Iran, Iraq, Jordan, Kazakhstan, Kuwait, Kyrgyzstan, Lebanon, Libya, Malaysia, Maldives, Mauritania, Morocco, Nepal, Oman, Pakistan, Palestine, Qatar, Russia, Saudi Arabia, Singapore, Sri Lanka, Sudan, Syria, Tajikistan, Tunisia, Turkmenistan, UAE, Ukraine, Uzbekistan, Western Sahara and Yemen.

But it’s not all bad. We also have international successes. Iga Świątek, a young Polish tennis player, just won French Open 2020. Minister Jacek Sasin quickly rushed to remind everyone, that Polish Tenis Association is sponsored by state controlled companies (with a little effect, as it’s a common knowledge that Tennis Association is in shambles) and tried to warm up in her glory. He was quickly reminded that Iga Świątek sponsors are, in fact Lexus and Red Bull. Others did some math and informed him, that with the financial award she got for her success, she would have to keep winning such competition non stop for ten years to earn as much, as he wasted on that failed organisation of illegal elections in may. Yeah, Sasin and his 70 000 000 is most prolific meme in Poland of recent years. After all, as long as PiS is in power, there is no chance for him being made responsible, so all we can do is to mock him…

This text was written for Britské Listy
Picture of Przemysław Czarnek by Adrian Grycuk via Wikipedia (C.C 3.0)