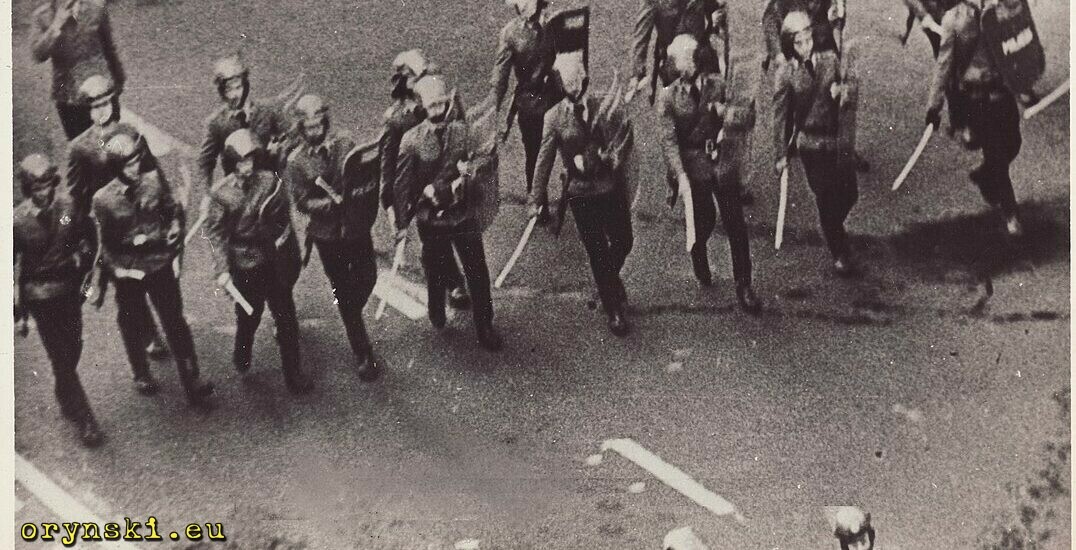 40 years ago General Wojciech Jaruzelski introduced Martial State in Poland. This decision is still widely discussed today. For the opposition it was an obvious tragedy, the whole resistance movement, that managed to achieve some degree of Freedom (the months before 13 XII 1981 were later nicknamed “a Solidarity Carnival”), had been brutally stamped upon. But from Jaruzelski’s point of view it was a tough call to make. He was pressured from Moscow and he could not exclude possibility that if he won’t do something about the situation in Poland, the Soviets won’t take care of the problem themselves. With the events of Prague Spring being not so recent back then, he had to take this threat seriously.

The Martial State was an extremely hard time for opposition leaders. Many were imprisoned and beaten, especially those from the working class. When natural leaders of the freedom movement – such as Lech Wałęsa – ended up in prison or isolation, the people, who weren’t that active in the opposition before that it would warrant them being arrested on the night of 13 December took over. The underground organizations and samizdat press bloomed (my own father started one of the biggest Polish underground paper – Wiadomości Bieżące), those were then picked up one by one and ended up in prison (my father, for example, was arrested a year later and after spending 6 months in jail was given a suspended sentence of 2 years in prison and a financial penalty).

It was a devastating blow for the anti-communist opposition, and yet less than 8 years later Poland managed to peacefully transition into a democratic country. It would not be possible without negotiations and certain degree of reconciliation with the leaders of the communist regime. While in Romania, for example, communism ended in the open revolution and after armed struggle Nicolae Ceausescu ended up being executed after a mock-up field court sentenced them to death, in Poland the opposition sat together with the communist at the round table and negotiated the path to the transition.

Many on the Polish right question this approach. The Round Table negotiations don’t go well with their fetish of armed struggle and giving up their lives for the motherland. They keep talking about “bringing communists to justice”. It is disgusting to watch people, who were either too young to have a chance of any meaningful participation in the anti-communist struggle (like Janusz Kowalski, MP from the ruling coalition teaming up with the leader of the nationalist movement Robert Bąkiewicz) or who weren’t important enough in their fight for freedom to be of any interest to the communist regime (like Kaczyński brothers, although some believe that the reason they weren’t arrested during the martial law is really that they actually actively cooperated with the regime) demanding that communist criminals are brought to justice. Especially if they look for those communist criminals all in the wrong place. It’s them, who made Stanisław Piotrowicz, a communist prosecutor who during he martial law persecuted opposition activist, a judge of the Constitutional Tribunal. It’s their colleague Karol Karski, PiS MEP, who was active in the structures of the communist regime as late as in 1988. It’s them who in 2005 placed Andrzej Kryże at the important post in Ministry of Justice despite him being a former communist judge who back in 1980 sentenced Bronisław Komorowski for organizing Independence Day celebrations during which they claimed that Poland is not an independent country. The list of communists in PiS goes on and on.

But the history does not matter for PiS. On the day of the 40th anniversary of the Martial State, the IPN, formerly Institute of National Remembrance, and currently, apparently, the Institute for Historic Propaganda, published a 4-minute clip about the Martial State and the anti-communist struggle. I want to challenge you: watch it and try to find Lech Wałęsa in it. You know, Lech Wałęsa, the leader of Solidarność, the first directly elected president of Poland and a Nobel Peace Price laureate:

(no points for finding Pope John Paul II in this clip, because unless you are brain dead (so, apparently the target audience for this movie) it is hardly an achievement).

Meanwhile, the other arm of the party propaganda, national broadcaster TVP tries to show Adam Michnik in a bad light. They are showing footage of Adam Michink forgiving Wojciech Jaruzelski, and calling him “a true patriot” and trying to frame it as a treason of the “solidarity elites”. This is of course not fair, as while people like Adam Michnik (or my father, for example) were on the different side on the political division in 1980, they are intelligent enough to understand the difficult situation Jaruzelski found himself in, and while they might not agree with his decisions back then, they are able to believe that he did what he believed was best for his country. Only simple minds such as Janusz Kowalski MP or his friends, right-wing thugs, can see the world as a black-white situation where we are always good and the other side is always bad.

But as if using that footage was not despicable enough, there is another layer to it: how TVP has obtained the tapes. See, when Teresa Torańska, one of the leading Polish reporters, known for her deep and insightful interviews with leaders of both sides of the political struggle in the 1980s, died, her heirs decided to give her personal archives – due to their exceptional historical value – to the Hoover Institute in the US. The parcel, sent to the US via a courier company, had been impounded on the border and taken over by the IPN, which quoted the law that “Everyone in possession of documents related to Polish pre-1989 history, who has no legal title to hold those documents, should release them to IPN”. The thing is, this law has been created so the secret archives of the political police, for example, could not be used to blackmail people, or sold abroad, but the vast majority of the Torańska archives were her own materials and recordings which she made well after 1990 – those particular recordings of Adam Michnik and general Jaruzelski were from 2001… Yet, the heir of Torańska’s house had been searched, the hard drive of his private computer was copied, and yet he was not charged with anything. He expected the IPN will take the pre-1989 documents as per law, and returns the rest of the Torańska archives to Hoover institutes, but nothing despite the documents being impounded in August 2020, so far nothing like that happened. And now we see those materials being made available to TVP for use in their propaganda…

So how is Poland doing 40 years after one of the most tragic moments in our recent history?

Well, we have a kind-of-martial-state today. As I wrote last week, the special “state of emergency” in the areas bordering Belarus have been extended illegally. The human tragedies still take place there and the government refuses to act – even when a 4 years old girl of Iraqi refugees got lost on the Polish side, while her parents were caught by the Border Guard and (illegally, of course) thrown back to Belarus by the Polish forces. No search action was allowed, as no humanitarian organization or volunteers are allowed into the zone, and the Border Guard pretended to search for the child for a few hours and then give up completely. Imagine what the outrage it would be if the child was Polish.

Meanwhile Łukasz Mejza, the deputy minister of the sport who was found to run a scam, trying to sell quack therapies to the desperate parents of the children, after ensuring support of his party (after all, PiS struggles for the majority, so they can’t allow themselves to lose even a single MP) decided to push back and organized a ridiculous press conference, when he cried how persecuted he is by the press, demonstrated his friend, who was allegedly cured by his wonderful therapy and banned journalists from asking him any questions. At about the same time the right-wing press is up in their arms after discovering, that Piotr Kraśko one of the most popular TV journalists, openly criticizing the government in the independent news station TVN has been caught driving without a driving licence – and it turned out, he had been driving illegally after losing it 6 years ago. Apparently, it helped to cover Mejza’s scandal for the bit, but not completely.

Radosław Sikorski, who won a slander case with Jarosław Kaczyński after the latter called him “a traitor”, has run into some trouble. The court ruled that Jarosław Kaczyński has to publish apologies in a commercial paper, but the PiS leader ignores the ruling. The laws allows for the victim to publish the apologies himself and then get bailiffs to chase the losing side for the money, but it seems there might be no bailiff brave enough in Poland to dare and challenge Kaczyński (not to mention, that nobody knows if he opened a bank account yet).

Meanwhile, after a woman, who was refused an abortion in the hospital in Białystok due to doctors being afraid of getting in trouble under a new political atmosphere (see last week’s piece), got her procedure in a different hospital, this different hospital is now under scrutiny. The departmental consultant of gynaecology demanded a report from doctors, involving a list of gynaecological procedures, a list of refusals of gynaecological procedures and all data relating to the abortion procedures performed – which can be proof that the doctors from the first hospitals were right to be afraid…

All that while in the parliament an extreme-right MP Janusz Korwin-Mikke had to be reprimanded by the Ethical Committee for saying that “sometimes woman should be slapped in her face to shut up”. He defended his stand, but after failing to get any understanding, demanded women members of the Ethical Committee be excluded, as “women, in general, are incompetent and should not be holding such functions”. But at least the Antoni Macierewicz’ playground, so-called Special Subcommission for Investigating the Smoleńsk Plane Crash ceased to exist. It cost the taxpayer over 25 000 000 zł and the result of its work is… nothing. They spread some utterly absurd conspiracy theories and bragged about how they had their report ready but so far they never published anything.

I guess many Poles would dream about being able to bring their politicians to scrutiny and punish them for their bad work, just as football hooligans did when after their club, Legia Warszawa, lost a game: the “fans” chased the coach of footballers, stopped it and bursted in to beat the players. No wonder that the government is trying to ensure that people think fondly of them, so after they finally temporarily lowered the taxes on fuel as a part of anti-inflation measures, they made it mandatory for all the garages to display information that the fuel has become cheaper thanks to the government actions. I am all for it, as long, as we would also be informed what has become more expensive thanks to government actions, but I guess there might be not enough space for such notices at the tills.

But there is good news as well. Finally, the Polish government takes the vaccine mandates seriously. True, after some citizens objected to the idea that workers who refuse to show the proof of their vaccinations to their employer would be forced to take unpaid leave, the government has to propose a different solution. And so if you refuse to share your vaccination status with your employer, you will be forced to take PAID to leave. This is brilliant: I am vaccinated, but if I can stay at home and still be paid, why would I share that information with my boss?

This text was written for Britské listy
Picture: Public Domain.