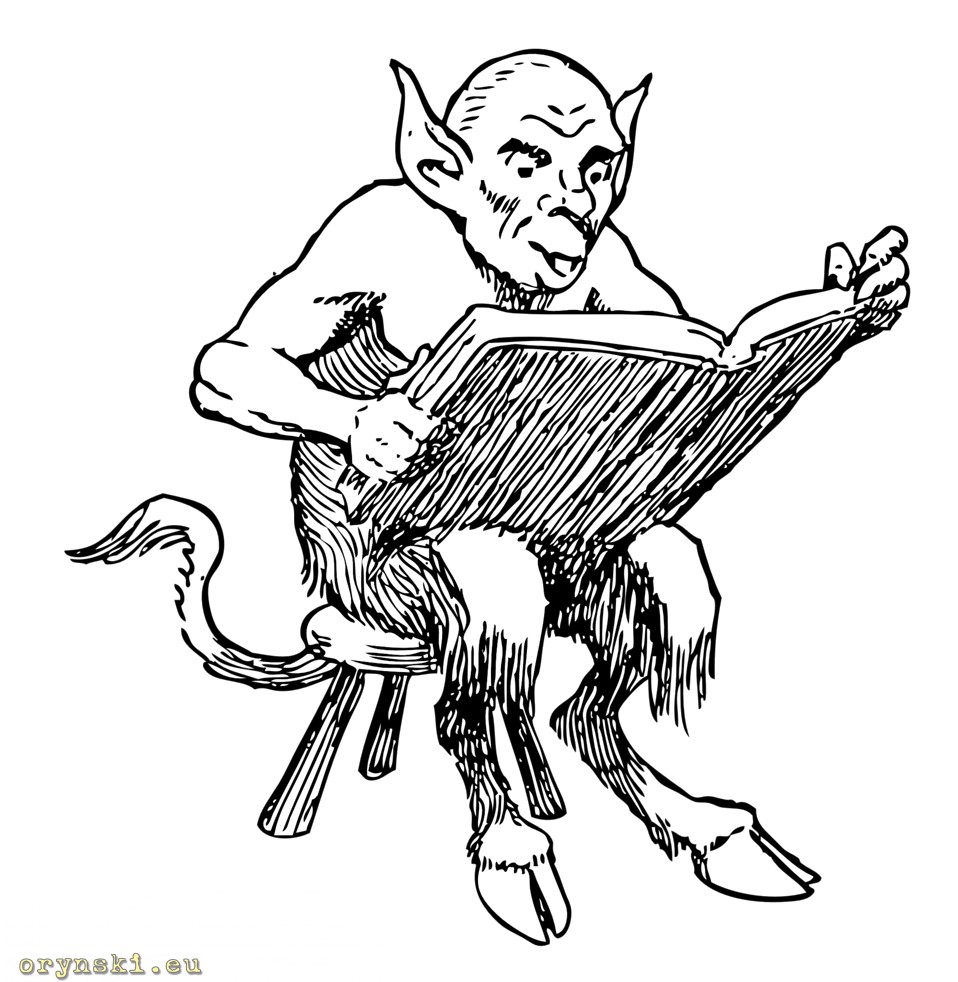 “Possessed Satanists are often wonderful people, polite, well-behaved. (…) I exorcised a priest possessed by a daemon of intellectualism. He seemed extraordinary, intelligent. The devil was well-conspired in him”. This is an excerpt from the interview with father Piotr Glas published at the website of the pro-PiS television Republika. It seems that PiS cadres are exorcised by default, as they obviously have nothing to do with intellectualism.

For example, Łukasz Sitek, a young, promising “journalist” of TVP, got completely drunk and instead of boarding a Gdańsk metropolitan train, took place in Pendolino Express that was about to depart for Kraków. When approached by the conductor, refused to pay penalty for not having a valid ticket, saying that “as TVP journalist, he demands that ticket will be issued to him”, then became aggressive and had to be removed by force by the police, whom he threatened that “he’ll make sure, that they are going to loose their jobs”.

We don’t know, where Mr Sitek spent the previous evening, that he got so wasted. Could it be a philharmonics? Krzysztof Wyszkowski, former anti-communist dissident and a member of the advisory council for Institute of National Remembrance, recently visited one, in Manchester. He shared his impressions with his Twitter followers, and so we can read that:
“A shape of a bra and the gap between legs can be seen at Ms Conductor… But it’s only Mendelsohn”. “Mendelson is a music to improve cow’s charm” “but a woman in trousers can waste even a slaughter”. Luckily, both audio and visual experiences quickly improved for Mr Wyszkowski, as “Brahms was good, because the wing of the piano was covering this old hag, and her view was not obstructing the play of the Chinese man”. The transmission has ended with a disgusted comment about lack of the culture amongst the Englishmen.

But why travel so far to listen to music, if back in Poland the first run of an oratorio “Icarus trail” about a Smoleńsk tragedy took place?

The show was sponsored by KGHM, state-controlled mining enterprise. It included songs with titles such as: “Bird Men”, “People died, but Poland is going to live” “Value of Polish wreckage” or “Is a Pole allowed to ask, who is against the Republic (of Poland)”? Unfortunately, the oratorio failed to bring final answers about what had happened in Smoleńsk. Just as special investigative committee chaired by Antoni Macierewicz. But at least some anonymous Internet user put together all theories they came up with so far.

And so, according to those well-paid experts, the presidential plane in Smoleńsk crashed due to:
– Artificial fog (produced by Russians)
– Electromagnet
– Fake radio-beacons placed on the ground
– Fake APM’s
– Meaconing – that is, intercepting, and then rebroadcasting radio navigation signals

It has also been shot down by a rocket and an electromagnetic weapon after it has lost lift due to bubbles of artificial helium that were released by the Russians on the ground. They thought about everything: they even reinforced a birch tree in which the plane finally crashed (or it has not, as it flew few meters above, and then the tree was broken in order to confuse investigators).

Experts agree that the plane was “overpowered at the altitude of 15 metres” (Macierewicz), “fell apart at 36 metres” (Nowaczyk) and never descended lower than 100 metres (Rońda). Also, It landed safely in the forest and only then exploded, or perhaps it did not explode, and some people survived and were killed by Russian special forces. The wreckage was then lifted away by a silent helicopter and replaced with the second one, that shows the signs of an explosion.

Dr Ziółkowski from Polish Science Academy differs. According to him, the plane exploded in flight. He proved it by boiling hot dogs. The exact cause and number of the explosions is not known yet, but at least we know that the assassins used TNT or Nitroglycerine, or thermobaric bomb (that theory was tested by blowing up a shed), or fuel bomb, or by unknown bomb, placed by Russian when the plane was serviced in Samara a year before the crash. It is probably when it has been painted with explosive paint as well.

Minority report says, that nothing of the above happened, it was all Russian “maskirovka”, and passengers of the fatal flight are held captive by Putin.

The results of those investigations were best summed up by prof. Ciszewski: “you should imagine a science fiction movie, in which they do some impossible things and there can be heard something like “Piii-vzioooom!”.

I don’t know about you, but for me, the whole Smoleńsk commission is a money well spent. One day it will become a classic, like Monty Python. And this is not our last word in that field!
“Research and development” is taking place in Polish Film Institute. A grant of 500 000 zł was awarded to a cunning research project entitled “celebrations of the 40-th anniversary of election of John Paul II for the pope”. I am sure, that publishing some DVD’s with yet another documentary about the Polish pope and printing a hundredth album of his private pictures, as well as uploading some John Paul II shorts to Youtube, is going to be a revolution in cinematography.

Meanwhile, pope John Paul II himself went to war. At least some bits of him. Polish soldiers in Afghanistan were joined by holy relics of the saint Polish pope. Well, it’s always something. Since there is no hope of them getting any new helicopters soon (see here), and the fact, that Antoni Macierewicz de facto dismantled the whole of the Polish military intelligence, the only thing left for him is to pray.

When it comes to international politics, the crisis in Polish-Israeli relations progresses. The newest development is the new idea to make it mandatory, that guides in Auschwitz museum are Polish. Ryszard Czarnecki, who was kicked out from his job as deputy speaker of the European Parliament for his abuse of another MEP (see here), was desperate to show, that he is still in business, so he tweeted a picture of himself with US education secretary Betsy DeVos, calling her “Polish Anna Zalewska”:

Senior PiS MEP Ryszard Czarnecki posted a picture of himself with US education secretary @BetsyDeVosED, describing it as a ‘nice and friendly’ meeting. The problem is that the women is not Betsy DeVos. No one’s quite sure who she actually is, but she does look nice and friendly pic.twitter.com/SvUByKvgPk

Except that the woman in the picture is not Betsy DeVos. Surprisingly as it might seem, she also isn’t Polish Minister of Education, because (although it seems to be too hard to grasp for Czarnecki) the Polish Anna Zalewska is Anna Zalewska.

Well, but at least he says that meeting was nice and friendly. This is quite unusual for Polish diplomacy recently. It seems like the Polish right looks at the map and try to find, which countries haven’t been offended by us yet, and then try to do something about it. Lately, Italians were outraged after a Warsaw school decided to change its patron. According to it’s head teacher, current patron Guiseppe Garibaldi “did nothing for Poland” and was known for being an adventurer, anti-Semite and a pirate.

It seems that also Irena Sendler does not deserve to be a patron of a school. Ok, maybe she saved lives of 2500 Jewish children, but she was a feminist, leftist, and she divorced her first husband. She was also a Jew and a communist. “Why we, Poles, can’t choose some crystal clear Polish personae for patrons in our beautiful, Catholic village?” – asks the local priest, who apparently has a big influence on local politics in the Lanckorona parish, as, after his protest, the commune administrator postponed the decision, using some minor formal pretext.

Rewriting the history continues. It seems that Mirosław Hermaszewski, the first (and, so far, only) Polish cosmonaut is going to be degraded from general to private for his alleged support of the communist government during the Martial Law in 1980’s. In their race to change history, PiS does not respect any sacredness, and protest against this are becoming louder. After authorities in Warsaw refused to grant permission for a Smoleńsk monument in a prominent location in the historic centre of Warsaw, the Piłsudski square was taken away from Warsaw and put under central government’s jurisdiction. The monument (designed by the architect to be located in completely different scenery) is now said to be placed in there. The problem is, that Piłsudski square is a sanctuary of Polish history – the tomb of the Unknown Soldier is located in the only part of the Saxon Palace that survived the war, and vast emptiness of the square symbolises all losses that Poland have encountered in its history – it is like a scar in the tissue of the Polish capital… No wonder that hundreds of people took to the streets to protest the annexation of this holy space by PiS.

But let’s end on a positive note: a new brand of a Czech beer conquers Poland. Poles, fed up with mass produced lagers turned to craft beers brewed in small independent breweries. But unlike Tyskie, Lech or Tatra, Czech beers are still valued pretty high and customers are willing to pay more for them. And so, the Žatecký Světlý Ležák enters the market. Straight from the small, traditional brewery in a little Czech town:

Except that it is not. Because it is brewed in Browar Okocim, located in Brzesko and owned by Carlsberg. But if the beer is advertised as Czech, it can be sold at higher price.

So, our Czech friends, Poles apparently still value you so much, that are willing to pay extra for a few Czech diacritic signs on the can of the beer. Enjoy it, till it last. As while our government has not offended you yet, apparently it is only a matter of time!

This text was written for Britske Listy
Picture of a daemon is Public Domain.

One Reply to “Meanwhile in Cuckooland 59”