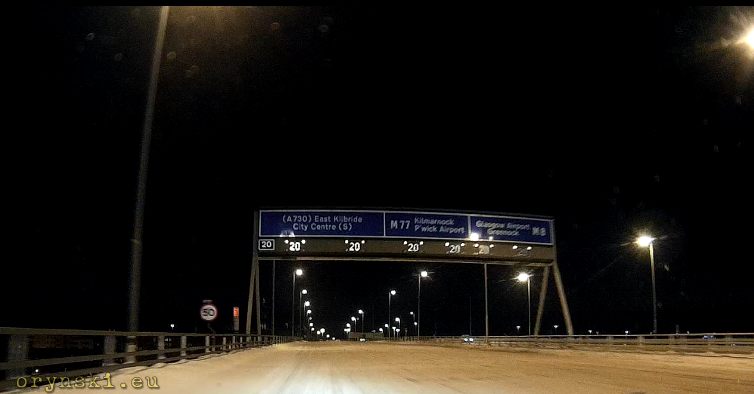 Glasgow has seen biggest snowfall in years. About 15-20 centimetres. I often mocked Britain for its inability to tackle even a little sprinkle of snow. But that was when it was indeed just a sprinkle. Now, with that amount of snow, it is no longer laughing matter. It is a SNOW ARMAGEDDON. And so, the situation this time is different.

I’ve been writing before, that British drivers make enjoying winter on the road impossible. And no wonder, as it is not only about fully understandable lack of skills and cars struggling on summer tyres. Because nobody listens to that advice, that can be seen on matrix signs on the motorways ususally since early October: “IS YOUR CAR READY FOR WINTER?” What for, if something happens, then we can always blame the government, right?

But it’s not just technical struggles of driving in the winter in the unprepared car. It’s just that they become completely unpredictable. Today, for example, I heard on the news that some drivers have decided to drive wrong way onto the motorway “to beat the traffic”. Just look at this guy, who looks as if he just came with the cunning plan “I got an idea, I know why we in Britain cannot drive in the snow, and in Europe, they can do it! They just drive on right! I am going to drive on the right side of the road from now on!”

But we are well past this stage now. The country has officially entered some kind of emergency state. Today, I came back to Glasgow from relatively un-snowy Isle of Bute in the afternoon. Up to Loch Lomond, the roads were clean but then it started to sprinkle. You could see tracks on the road, and while there were still some cars coming towards Glasgow, it seemed like only a few brave souls managed to escape the city struck by disaster. The radio was broadcasting endless line of warnings: AVOID UNNECESSARY TRAVEL! STAY INDOORS! RED SNOW ALERT! This was accompanied by pieces of information that sounded like if they were coming from some kind of apocalyptic movie: “Emergency Services have been sent to help people stranded on M80!” (this is why, when driving in Britain right after hearing the first radio announcement advising you to stay on motorway due to change in weather you should leave motorway at the first exit ), “450 000 kids are to stay at home, as extreme weather conditions forced schools to close!“, “Scot Rail cancells all trains tonight and for the whole day of tomorrow!“, “Red Cross is to deliver camp beds and blankets to travellers stranded at Glasgow Airport!” (apparently they are to use “specially equipped 4×4 vehicles to deliver them – what special equipment you need to drive in 10 cm of snow?).

The town itself also looked as if it was abandoned: the roads were unusually quiet for the time when the roads are usually bursting with afternoon rush hour traffic. Most of the businesses closed for the day, so you were driving through the town of empty car parks and closed shutters with occasional Polish or Pakistani shop opened here and there. As the evening was drawing in, the roads became more and more empty. On the Kingston Bridge – one of the busiest stretches of the motorway in Europe – I had all five lanes to myself.

I was surprised that even the main roads were covered by thick layer of snow, on the other hand, there were barely any gritters on the road – perhaps its drivers were told to go home on the health and safety grounds?

Surely taking all buses off the road in order to ensure the safety of passengers did little to facilitate following government advice. You know, maybe I am strange, but if I was to avoid any travelling, I would like to be at home first. Apparently, other people feel the same, so no wonder, that when I was driving home, apart from abandoned cars dumped in the middle of the road (apparently it’s too much to ask that they are pushed to the side), the traffic consisted of groups of people walking in the middle of the road (as of course nobody cleans the pavements). Some were only nipping to the nearest gas station, that was still open, in hope that there would be still some food left for them. Others were for a longer trek, like that group, that desperately tried to catch some ride after walking halfway across the town: 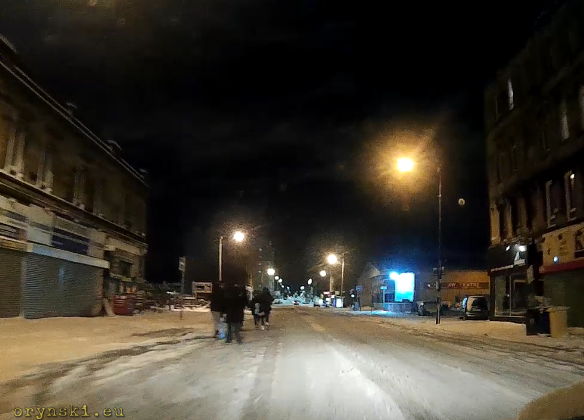 Apart from some occasional pedestrians, the town was extremely quiet. If not for the lights in the windows, one could believe that 90% of humans in Glasgow were suddenly abducted. Those, who were still around, often struggled to stay upright in the slippery snow, so the Zombie Apocalypse scenario would also be pretty believable.

On my way home, I gave lifts to a few people. Some of them were really exhausted after having to walk a few miles in an ankle-deep snow throughout deserted city centre (courtesy of Scot Rail, First Glasgow and other bus companies). I felt like that one last hero, that still travels the world, trying to keep the spirit of the human kindness alive… And all that for a mere 5 pounds per wheel – as this is a difference in price between summer- and all-season tyre to my car.

Tomorrow, another snowy day is predicted. Government advises to avoid any travel and stay indoors. I can’t wait: there might be a chance, that I will have a whole town to myself again!

So are we still in lock-down? Or is that a normal life now?

That moment, when you need to pee while travelling on the British motorway…

“Driving in the snow is impossible. Period”

A crisis-proof industry.
on the road Scotland