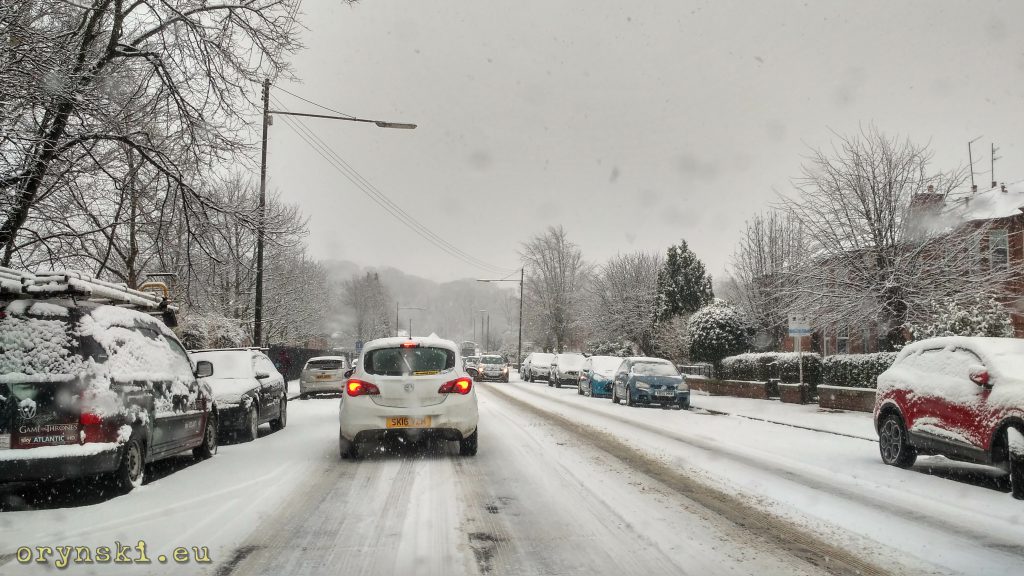 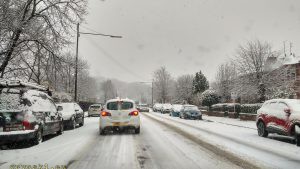 I always loved winter driving. When I lived in Poland, I was taking every opportunity to drive out of the town, or to have some winter fun on the empty supermarket car park. But since I live in the UK, I do it less and less often. And it’s not even because there is rarely any snow. It’s just about British drivers – they are able to spoil all the fun.

And I don’t have problem with that they cannot drive in the snow. You can expect of them to be experienced in that field if in Glasgow, on average, we have snow twice a year. And even then it melts after just a few hours. And while I don’t understand why they think, that summer tires are good for all year driving, I do understand that changes do not come easy to Britain. After all, they still use separate taps for cold and hot water, you know. Whenever possible, I just avoid taking main routes when it’s snowing. The quality of driving is in inverse proportion to the number of cars on the road, even if those rural roads I use will be covered with 20 cm of snow. I wrote about that in the past (in Polish). But sometimes you have no choice but to take a main road. And this is where the problem starts. Because it’s not about skills – it’s about mentality. A strange case of a dog in the manger.

I don’t know, perhaps it is because many Britons have difficulty to accept that they are not the best at everything. Perhaps they are honestly worried about you. But it is pretty annoying that so many drivers believe, that if they weren’t able to climb a little hill or go over a snowy speed bump, nobody else can do it. When driving in wintery condition in Britain, I keep bumping onto people, who stop me only to tell me that “I won’t make it”. As I can count all snowy days in Scotland over last decade on my fingers, I do remember every single of them very well. And at every single of them this happened to me at least once.

Sometimes it’s just funny, like that other day when I’ve been driving a truck and I got stuck in traffic behind a 8-wheeler flatbed lorry that were pointlessly spinning its wheels on the snow. I approached the driver and I’ve advised him to raise a rear axle, which would put more weight on the drive axle, thus giving him more grip. The driver, a guy in his sixties, looked at me with disapproval and announced, that he is driving longer than I live on this world, so he won’t be taking lessons from me. Funnily enough, this is the second time I heard those words. First time happened a few years back, when I politely tried to tell an elderly gentleman that putting snow chains on the front wheels on the RWD car might be the reason why he is struggling up the small hill.

This time I also decided to do not continue discussion, and, after asking one of the other drivers to stop the oncoming traffic for me, I got back to my lorry, and started to plod ahead. I would have no troubles to go past the stuck lorry if not for its driver, who decided to jump off his cab and stand in my way – only to tell me in some less-than-polite-words, that “I won’t make it, as he wasn’t able to”. Luckily other drivers pulled him away, so after engaging my diff lock and one of the higher gears I managed to make my truck moving again and drove away. 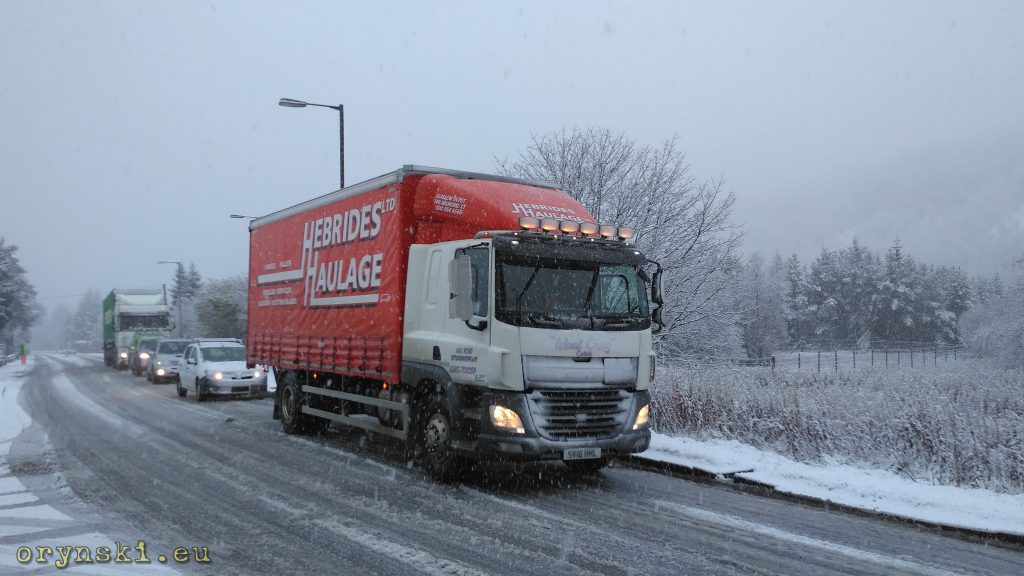 Sometimes I truly believe, that the need to inform me, that I might get myself in the trouble comes from genuine goodwill. Just like last Thursday, when I was heading back to Glasgow from Castle Douglas through the hills East from Galloway Forest Park. At one point I had to stop for temporary traffic lights – the driver of the oncoming van stopped to inform me, that “I might not make it, as there is already one wagon in the ditch”. I thanked him politely and promised that I will be careful. I see why he could be worried seeing a big lorry attempting to take a slippery road when one van already managed to go off the road and I appreciate his concern. 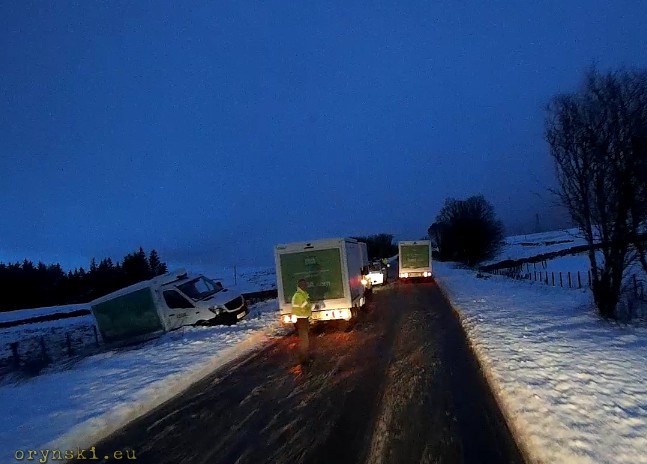 Bud sadly, sometimes you have to deal with much less polite people. Only today, I had two situations like that. The first one was on one of the dual carriageways in East Kilbride. On the left lane there was column of visibly scared drivers doing around 10 mph. I’ve decided to overtake them using empty and equally snowy right lane. Sadly, one of them considered it to be too dangerous, and pulled right in front of me. By this maneuvre he proved, that my speed of approx 30 mph was perfectly safe, as not only I was able to brake in time without skidding off the road, but I still managed to keep a safe distance from him. Still, I had to continue foer a few minutes behind a red corsa, who’s driver was convinced that if he cannot drive safely faster than 10 mph, nobody can.

The second encounter was much worse. I’ve been, again, driving on the dual carriage road, this time at Castlemilk in Glasgow. In the distance I could see a few cars struggling to pull out from the traffic lights. Closer to me there was a car with a small van behind. The van driver left his vehicle and was standing next to the driver of the car in front of him. The cars weren’t parked next to the kerb as they should be, they were basically sitting near the middle of the road, but there was still enough space on the right to pass them safely. Despite that, the van driver ordered me to stop with the imperative gesture: 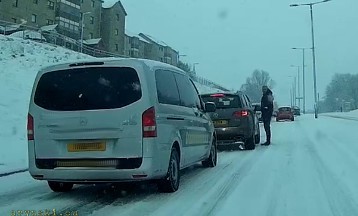 I was not interested in yet another chat about “impossibility to go up that hill”, especially that I was already doing well in tackling it, so I answered with a polite gesture asking him to move away. He stood in place, looking at me provocatively. I continued to drive ahead with the speed of lazy cyclist, keeping even more to the right, hoping that he will finally let me pass. When I almost approached him, he moved sideways, putting his body against the car. I often have to park on the very busy and narrow road, and when getting in or out of my car I do the same, allowing passing cars to move by me very closely, so I continued to drive, sure that there is enough space for me. But obviously the van driver could not stand the fact that somewhere is going past when he is stuck in the snow. I heard two loud bangs, as he attacked my car with his fists, trying to smash my mirror. At this point I lost my temper for a moment, so I instantly stopped and jumped out of my car to ask what exactly his problem is.

It turned out, that problem is me. Apparently I can’t drive and I should not have a driving license (It’s funny, when we remember that it comes from someone, who got stuck on a small hill due to a few cm of the snow). The van driver was willing to fight me, and only after threatened that we will call the police backed down. But he was still aggresive verbally – he told me that if I don’t want to have my face smashed, I’d better wait until everyone who is stuck in here managed to get their cars moving again. I was not willing to comply – first, I can see no reason why I should do that, if I have no problems going, and secondly, the company at this particular meeting of summer tires enthusiast was not to my liking. So I simply got back into my car and drove away (somehow I was not afraid that he will jump into his vehicle and start the pursuit). After a small slalom between those few, who still did not managed to move from the traffic lights, I drove away.

And it’s not that I am some kind of champion in winter driving like Tommi Mäkinen. I do not possess any exceptional skills. My car also is in no way some extreme off road monster – it is just a small FWD city car with regular all-season tires. I drive it very carefuly, as I am aware, that with 95% of my winter driving experience being in RWD vehicles, some of my reflexes might be not exactly the ones that are needed after skidding it out of control. I am just an ordinary driver, who has been lucky to be able to gather some experience of driving in the snow.

But even my Scottish friends look strange at me when I tell them that I like to drive in the snow. Because in Scotland everyone knows, that driving in snow is next to impossible. Such claim just causes some wires in their brain to cross. They can’t comprehend, that while for them even an inch of snow results in the total road madness, amongst all those drivers who struggle there are some, who are not afraid to get behind the wheel, even in Britain. But any attempt of discussion proves futile, because the final argument is that I myself once went off the road. Back in 2010. In Norway. 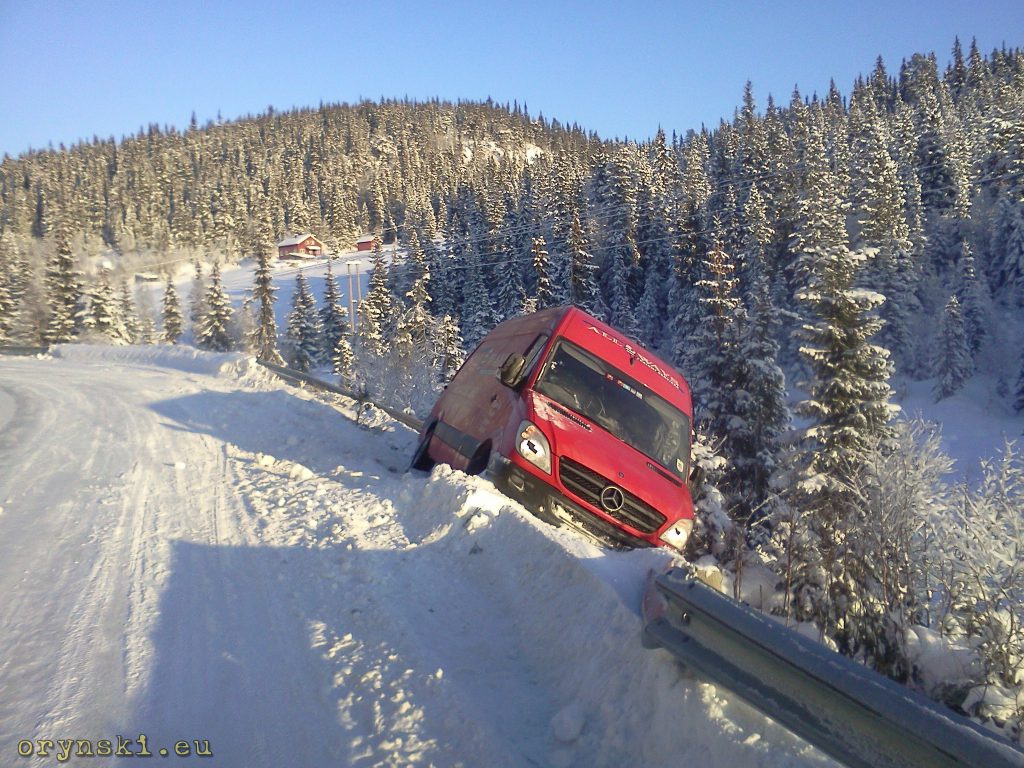 But isn’t it obvious that to be able to get my British van off the road in central Norway, I had to drive for three days across snowed roads of Europe first? During just this one trip, I propably clocked more miles on the snow that average Glasgow driver covers in decade, if not better. But it’s not important, nothing will change this frame of mind.

Because driving in the snow is impossible. Period. Even you went of the road 8 years ago, so don’t try to tell us that we are wrong…

Driving lorry on the Atlantic

Over the hills and far away

This article may save your life.
Comments (2)
Great Britain on the road Scotland society

2 Replies to ““Driving in the snow is impossible. Period””