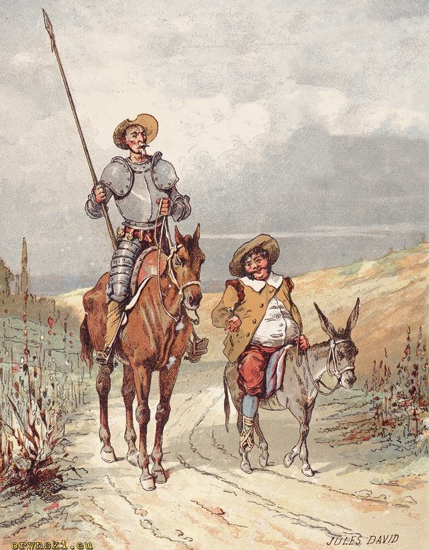 There is a serious problem in Piotrków Trybunalski. One of the first decisions of the newly elected council was to vote on entrusting the city to Immaculate Heart of the Holy Mary, Queen of Poland. This might be too problematic, as the local chief of the Order of Friars Minor points out: “Piotrków has been already entrusted to the Holy Mary of Piotrków”. As father Gracjan Kubica points out, despite many names, the Holy Mother of God is only one. I guess that the Immaculate Heart is a part of aforementioned Mary as well, so there is no point to entrusting the city to that part of her body separately, just as it would make no sense to entrust it to her pancreas or bowels…

But this is not the biggest news coming from local politics. Wojciech Kałuża, voted to Silesian local parliament from the list of the opposition, but after being bribed with the position of deputy speaker and, allegedly, a promotion for his wife working in one of the coal mining companies, decided to switch sides and to join PiS. His voters are outraged and feel cheated, but he says that “his only party is Silesia” and that “he hopes that by the end of the term, they will understand his decision”.

Similarly, in Lower Silesia, the local parliament also came under the control of PiS when a group of local independent politicians, without whom none of the parties had majority, agreed to join coalition with PiS after prime minister Morawiecki promised that more money from the copper ore mines will remain under control of the local governments.

There are some other news related to religion as well. Polish army contingent in Afghanistan will have a new, unusual task: the soldiers are to escort a priest, who will pilgrimage from one Polish army camp to another, carrying relics of Holy John Paul II. “In the year of the centenary of Poland regaining its independence, the teachings of John Paul II will be brought closer to Polish soldiers, which will help to reassure the spirit of service and patriotism in them” – says lieutenant Kuźniar, the spokesperson for the army. This is not the first action of this kind – the relics of the late pope accompanied Polish soldiers during their activities in Romania. They have built a chapel there, because, apparently, this is what soldiers do.

If you had any doubt, don’t worry: from now on, we also know now what journalists do: they spread Nazi ideologies. At least according to the government, who seem to be very keen to defend neo-Nazis who were captured by undercover TV crews during their celebrations of Hitler’s birthday. One of them claims, that they were paid to stage the celebrations by the TV crews. To be frank, I hardly see how it is to be a defense, as if the true Polish patriots for a mere 20 000 zł agreed to dress up in the Nazi uniforms, that they completely by coincidence happened to have at home and praise Hitler without asking themselves who would pay for something like that and why then it’s probably even worse than if they were real Nazis. It also fails to address the fact, that in other parts of the same reportage there was a secret footage from a private music festival, during which neo-Nazi bands were playing to the public that was expressing their joy with the Nazi salutes. But apparently this was good enough for the investigators, as soon after the picture of the undercover journalist making Nazi salute to fit in with the others emerged in the right-wing press, the government agents turned up at the journalist home, accusing him of propagating Nazi ideologies. According to Gazeta Wyborcza, the decision to sends agents after journalists came from above, overriding local prosecutors, who agree that their actions were fully in line with the standards of investigative journalism. The decision to prosecute journalist has been quickly retracted due to loud protests, but minister Ziobro subordinates don’t give up yet – they simply announced that they acted too hastily and that it does require further investigations by another prosecutor’s office. Some suspect that this was just a cocky provocation of Ziobro after new US ambassador to Poland warned against government attacking free media – the station TVN, that broadcasted reportage about neo-Nazis is owned by American consortium – and that it was quickly retracted by Morawiecki who don’t want any further confrontations on the international stage.

This is not the only plot twist in the story that has shaken Poland recently. In the more recent case of a car mechanic, who was so nice that he fixed a headlight in a lady’s car after hours, then charged her symbolic 10 zł only to find, that she was an employee of the tax office who accused him of not paying taxes on it. While the mechanic was yet again set free from the court, the wanna-be secret agent from the tax office landed herself in trouble. Police just filed a case against her, accusing her of willingly and knowingly driving an unroadworthy vehicle on the public road, which can result in a fine of up to 5000 zł. This is probably the only case when everyone in Poland hopes that police manages to punish a driver guilty of minor fault in his or her car…

But sometimes Poles simply feel sorry for the police officers who simply have to deal with such crazy shit on daily basis. Just like when Jarosław Kaczyński called on the cops escorting him and former president Lech Wałęsa in court (where they fight over some irrelevant case of who said what about whom). Why did the PiS leader feel there is a need for the police intervention?

Lech Wałęsa was sporting a T-shirt with the word “Constitution” on it, which amused Kaczyński. Someone, probably one of the journalists, asked: “why are you laughing”, addressing Kaczyński as “Pan Jarek” (Mr Jarek). Kaczyński was outraged that someone dares to speak to him that way, or, actually, dares to speak to him at all, and while the man refused to stop talking to him, he demanded police intervention. You can watch the whole situation in here:

This is a sad thing to watch – de facto leader of Poland is, in fact, a grumpy old man, who has completely lost the touch with the reality. No wonder, that his subordinates act in a similar way. The recent decision of the Ministry of Energy should find approval not only from Kaczyński but also from Don Quixote of La Mancha: it has been announced, that as a part of the new energetic policy all wind turbines in Poland are to be scrapped by 2035. No, you read it right: the government of the most polluted country in EU will scrap the wind turbines, instead focusing on the coal mining industry.

If only someone in the government watched a promotional clip, prepared for the occasion of Poland hosting the UN climate change conference:

But who knows, perhaps they already watched and (unlike everybody, who ever had to breath Polish air) believed in it? And this is why they think, that Poland’s air quality is so good, that no further action is required, and they can instead turn to please coal miner’s lobby and anti-wind turbine quacks?

But, with the wind turbines gone, what challenge the knight-errands in Poland will have? Well, luckily, one can always kill protected species. In August this year, two young huntresses posted their picture from a bird hunt, on which they pose with the birds they shot. The specialists quickly pointed out, that one of those ducks is actually Garganey, which is under strict protection in Poland. A crime has been reported to the police.

Unfortunately, police dropped the investigation. They claim that since the bird was killed during mass hunting, it is impossible to say exactly who shot which bird. And the fact, that hunters assume that the bird was shot by this hunter, who’s dog brought the dead animal, is not sufficient to press charges. Pretty convenient for the hunter, if you can claim the animal for the trophy, but don’t have to admit you shoot it if you made a mistake, eh? And what with the law that also makes possession of dead protected animal illegal?

This has again brought the topic of hunting as a sport: hunters often argue, that they need to regulate the population of the animals to avoid agricultural damage and that they carefully chose the animals they shot. But this narration breaks down when it comes to bird hunting: travelling birds cause no problems to farmers, their exact population is hard to establish, and, as seen from several cases of hunters shooting protected species (and also, is obvious for anyone who ever tried to recognize a bird at dusk), it’s hard enough to establish the species of the bird in a split second that hunter has to make a decision of pulling the trigger, not to mention the condition of the particular animal. If nothing else, bird hunting is the simplest proof, that the whole hunting business is actually just a cruel killing game with no regards to the nature or well being of the animals.

But at least in the international politics everything goes smoothly. Our top politics keep their fingers on the pulse. While Russian warships were attacking Ukrainian vessels, our president was busy tweeting about a girl winning this year’s kids Eurovision… Also, Prime Minister Morawiecki is active in social media. Recently he proudly announced on Twitter, that Brexit negotiations are a great success… “It was worth to negotiate efficiently and meritorically. He achieved a compromise – a compromise best for Poland and Poles!”. In a short clip published by his office he informs Poles, that thanks to his negotiations the right of Poles living on the islands are secure, and so is the UK’s funding for EU projects in Poland, even those, that haven’t started yet:

It would probably be a great surprise for Theresa May to not only learn, that she still has to pay for some investments in Poland but even to find out, that she was allegedly negotiating with Mateusz Morawiecki…