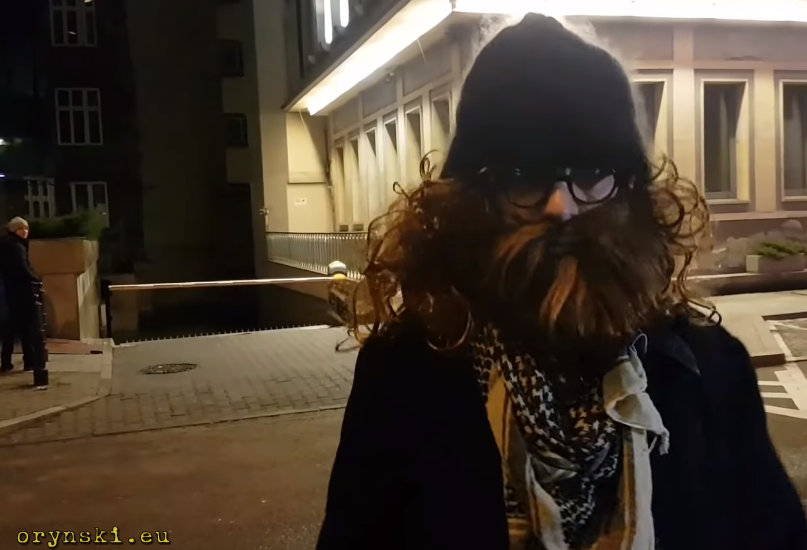 Many of us might remember a situation from primary school: a kid, who desperately wanted to be admitted to the group of cool kids tries to buy his way in. But even if he spent all his pocket money for sweets to give to those cool kids, it only makes the thing worse: they lose any respect they still had to him, and instead mock and contempt him even further, while the rest of the class see him as a toady and no longer wishes to side by him when he is being mobbed.

The latest achievement of the Polish government in the field of international politics is something like that. They decided to stick shatter our relations with Iran and agreed to host a conference on the Middle East matters (or, as Israeli prime minister put it, a conference of the countries that share a common goal: war with Iran) and what we gained by that?

– Most of the EU countries pretty much ignored the summit – apparently, unlike Poland, Israel, Saudi Arabia and Trump’s USA, they are not exactly interested in escalating hostilities with Iran.

– Israel diplomatically spat in Poland’s face: Netanyahu forced Prime Minister Morawiecki to wait over an hour for the planned meeting between the two. Meanwhile, Israeli media again blames Poland for Holocaust and demand some reparations.

– US ambassador promised to increase the number of US troops of Polish soil, only for that promise to be withdrawn by her superiors. Meanwhile, a leading American journalist talks about Warsaw Ghetto Uprising being a struggle against Polish and Nazi regime… Americans also demanded some money from Poland, allegedly owed by Poland to Jews, although it is not clear in who’s name they were speaking: the USA agreed to take over any claims that could be brought by its citizens back in 1960…

– Saudi Arabia announced that they introduce an embargo on the Polish beef after it had emerged that some slaughterhouses were killing sick animals and still processing them into the meat.

Yeah, surely that summit was a great diplomatic success…

As for those irregularities of the meat market, they were uncovered by reporters from the TVN24. Although the minister of agriculture said that those were only incidents, he decided to react sharply and… attacked the journalists. In his opinion, this definitely damages the name of the Polish meat industry in the world, and therefore one should wonder, what were intentions of the reporters. “I am not even trying to think, if they really had good of Poland in mind” – said minister.

The Kaczyński tapes affair is also not going well for his party. Gazeta Wyborcza regularly publishes new material, forcing PiS backtrack and make several U-turns. They seem to be completely lost in their explanations – PiS spokesperson regularly manages to contradict herself. The affair seems to be more and more damaging to PiS – it has emerged that Kaczynski’s closest associates used to be informers of the communist regime, yet they somehow managed to evade need of lustration or having their pensions cut in a recent seizure of the “communist privileges” that harm many innocent people. They are also involved in process of pumping the state’s money into father Rydzyk’s business emporium. Apart from recordings, Wyborcza published several documents proving Kaczyński’s personal involvement in the scandal. In most recent days it has emerged, that in order to obtain the required signature, the Austrian businessmen who is suing Kaczyński after he tried to evade paying him for his services had to pay 50 000 in cash (a bribe?) to a certain priest… No wonder, that situation is so critical, that Kaczyński himself went to visit Minister of Justice/Prosecutor General in his office.

Meanwhile, Central Anti-corruption Bureau declined to investigate Kaczyński. Nobody is surprised, not only because Kaczyński seems to be above the law (his car is the only one, that is not checked by security on entrance to parliament compound!) but also because the chief of CAB is a former employee of Srebrna, the company controlled by Kaczyński that has a central position in this affair. Ryszard Czarnecki, PiS MEP, known also as Vaseline Man, for that he is known to be able to tell any crap just to brown-nose his party’s leaders, denied, that there is no conflict of interest. According to him, it’s quite opposite: the fact, that person in charge of investigation worked for the company that is to be investigated controlled by the man who is to be investigated is an asset, as “his inside knowledge might help to issue common-sense assessments”.

But it seems that PiS is aware of the scale of their problem. Jarosław Kaczyński even agreed for an interview, which is quite rare for him. Of course, he went to a pro-PiS magazine, so the whole interview can be summarised in just a couple of sentences:
“- Do you agree, that the whole affair is just a washout, a failed attempt to smear you by the opposition?
– Of course, because as everyone knows, I am an extremely honest, law abiding person.”

Kaczyński seems to be not the only one who has something to hide. The State Forestry asked companies, who buy timber from it, to help hide the scale of the tree-felling from the public. Also, the recordings of the meeting between Minister of Environment and hunters had been published. In this recordings, minister admits that he aims to slaughter all wild-boars to please farmers (more on that here), even though there are already barely any left. The cherry of the cake is that on that recording we can hear his deputy asking for the meeting to be not recorded, as “she is going to talk about things that she would rather not want to become public”.

TVP, a government controlled public broadcaster, is also having a hard time. Council of Media Ethics issued a statement, in which they heavily criticized TVP for it hate campaign against the recently murdered president of Gdańsk. According to the council, TVP broke 5 of 7 points of Ethical rule of conduct and the opinion that TVP practices propaganda aiming to destroy adversaries of the ruling party” and “uses the worse techniques, leaving them no chance to defend themselves”.

Since Adamowicz’s murder, protesters gather regularly outside TVP headquarters during a broadcast of their flagship propaganda “news” programs. The station decided to counteract, and staged a provocation: one of it’s employees, formerly known as a Youtuber who made his name by going to manifestations filming people after angering them by aggressively asking them stupid questions, came outside wearing false beard and glasses and provoked the protesters:

Then, when the crowd was already aggregated, Magdalena Ogórek left the station. She was met with the crowd shouting “SHAME” and “EMPLOY SOME JOURNALISTS” but she was nonetheless able to get to her car and leave the car park, smiling. The footage can be seen here.

This is not the first time, when Jacek Kurski, who is in charge of TVP, staged some attack on PiS followers only to use it as an attack on its political opponents: we know it from the actress hired to play the victim of the attack back in 2009, who went public after she hasn’t been paid for her services.

Also this time the situation was reported as a mad mob brutally attacking independent journalists, but this time TVP broke all rules: the station published names and photos of the alleged attackers. As a result, those protesters were threatened by members of the public, some of them were also harassed by TVP reporters – one of them even forced his way into a psychotherapist office, luckily there was no patient there at the time. Several of the protesters were also visited by the police and accused of blocking the traffic (they stood in front of Ogórek’s car). I wonder if the police is so busy investigating traffic offences, surely a visit to Ogórek will also be in order, since she has been filmed driving using her mobile phone…

But when it comes to such matters, you never know. A 62-years old protester that was attacked by five skinheads in their twenties (we wrote about it here) is now sharing the bench for the accused in court with them. They are all accused of “participation in a brawl”. Meanwhile, another opposition activist, who was kicked by PiS fanatic in front of the police officer has been denied justice. Policeman refused to book the attacker, so the investigation has been dropped, as it was unable to find the perpetrator, despite that his face is clearly visible on the footage from the incident. She appealed, but was told, that she was in a crowded place, and “random kicking can happen in such circumstances”.

But there are good news as well. Poland has new deputy Minister of Digitalisation. A right wing MP Adam Andruszkiewicz, known mostly from being a radical right activist and a fraud, who claimed expenses for travelling 68 000 km in his private car, despite not having a car or even a driving licence, began on the high note. He promised to tackle Facebook. And so, from now on, if you were banned from Facebook and you think it was unfair, you can alert the ministry, that will then appeal on your behalf, and if Facebook decides to ignore them for 30 days, then… the case will be closed. Well, Poland has got up from its knees indeed.

But it seems that Mark Zuckenberg don’t have to worry, as Andruszkiewicz has other problem. In order to make it possible to recruit him to the government, an investigation regarding his involvement in electoral fraud back in 2014 had to be swept under the carpet. But of course, those pesky journalist had to have a go at this again. Don’t they really care about the Polish interest at all?

Andruszkiewicz, accused by his former collegues to have absolutely no idea about any computer related matters, is not the only “expert” working for the Polish right. An MP from Kukiz’15 party just employed the leader of Polish anti-vaccination (or rather: pro-epidemic) movement as his assistant. Dr hab. Jarosław Szymanek, known for his legal expertises supporting PiS take over of Constitutional Tribunal has just been banned from working in Academia after he was found guilty of plagiarism: he published 18 pages of his student’s dissertation under his name. No wonder, that everything in Poland is going as it does: the government limos had yet another crash after a 23 trainee-bodyguard with no professional driving experience was put behind the wheel. Perhaps it’s only well, that the new Boeing 737 purchased in November 2017 to carry VIP’s is still grounded due to lack of trained pilots, and the VIPs still fly on the planes chartered from LOT. Worse, that the government managed to completely cock up the biggest hope for the Polish industry in recent years: the mass production of graphene. After the inventor of the process, dr Włodzimierz Strupiński, has been side tracked, the right to produce this revolutionary material has been granted to a specially established company, but nothing ever came out of it and it has just announced that it’s selling out its machine park. Not that it matters anyway, as by this time the Chinese already developed their own method of producing this material…

It seems that the only hope is if Polish citizens take matters in their own hands. The first success is already here: European Centre of Solidarity seen their government funding drastically cut after it has refuse to submit itself to government demands regarding their historical policy and personal decisions (they were unhappy with the fact, that ECS “promotes leftism” – funny, if we remember that Solidarity was first of all a trade union fighting for worker’s rights). The lacking 3 000 000 zł have been raised in a spontaneous crowd-funding action. But Poland hardly can be run by a crowd-funding attempts of the opposition supporters, can it?

This piece was written for Britské listy
Picture: screenshot from Youtube.