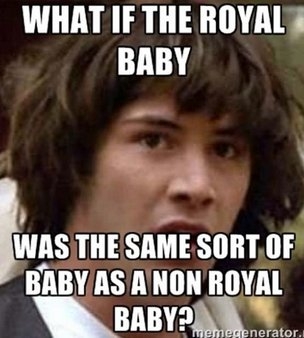 I am not interested in celebrities, but recent developments in that field cannot be ignored. 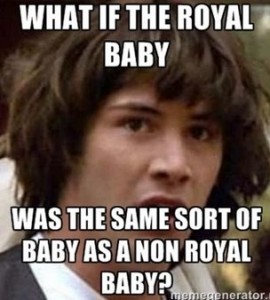 British media are already on full-blown diarrhea on the subject of birth of the Royal Baby. Tabloids are racing to be first to inform about such important and unheard of developments as “grandma and granddad visited hospital” or “members of Her Majesty press service informed, that Her Majesty is very happy with the birth of her great-grandchild”. Soon the critics will raise their heads and the articles going against the flow will show up. I expect so brave criticism like “Colour of Princess Kate’s trench was not exactly suitable for a mother of future King” or “Prince William holds his baby with his left hand, and he should do it the other way round so his royal rings can be exposed better”.  Or something. What really fascinates me here is the fact, that nobody really touches the core of the problem. People, it’s 21st century already, are you all out of your mind?

Because – let’s be frank about it – like it or not, Royal baby is exactly the same as any other baby. I bet that his parents also believe that it is the most wonderful creature on this world and it’s poo smells roses. The only difference is that this particular baby had a misfortune to be born in the Windsor family. Yes, exactly: a misfortune. Because it’s probably very nice to be rich, but not everyone likes to be a celebrity. And this is the fate of this poor little chap as he was not given a choice. From his youngest years all his life will be turning around showing him to the media in carefully chosen moments and trying to hide him from paparazzi for most of the remaining time.

I always wondered how it is, that members of the Royal Family, less or more intelligent people after all, simply accept the existing situation. Perhaps they just live in this surrealistic bubble, cut away from the real world and therefore they believe it’s absolutely normal? Or maybe they just take up the job that their fate brought upon them and consider it as a duty? Possibly they are refined cynics and they simply accept the fact, that for the trouble of smiling and waving from the balcony to a bunch of hysterical tabloid readers, they can enjoy a luxury life provided to them at the expense of that mob? I don’t know the answer to this question, but I tend to lean towards the first option, as I simply don’t believe that a decent man who understands the world we live in, could enjoy such a sumptuous life at the expense of the people, for whom theoretically he or she is responsible. Especially in the current economical climate.

Yes, I know. The official data from Buckingham Palace claims, that the Royal Family is a pure bargain for a taxpayer, but this data is slightly controversial. Republicans, who take into consideration also the hidden costs of upkeep of the Royal Family, such as ensuring their safety during their official visits etc. calculated, that the costs generated by the Windsor family is over five times higher and adds up to well over 200 000 000 pounds. The monarchists point out that the budget get some income from Crown Estate, that is from (I am simplifying here) Royal Family properties and businesses. But this is not so easy. Firstly. not from all of them (Duchies of Lancaster and Cornwall does not get into that lot). Secondly, it is debatable if the Crown Estate is a private property of the Royal Family, or if it belongs to the institution of the King, which, if the monarchy was abolished, will simply become a common property of the state – that is, of all of the taxpayers.

The next controversial issue related to the Royal Family is the alleged fact that their existence works as a tourist-magnet. But the Visit Britain conducted a research that shows, that Royal Family is placed nowhere near the top on the list of the biggest attractions of Britain. Common sense also prompts, that the Royal Family can be rather an obstruction for visitors. The picture with a funnily-dressed soldier guarding the Royal Palace can be made in several places in Europe – for example at Prague Castle, where one can also watch change of Guards gala. The difference lies in that when visitors to Czech capitol after watching marching soldiers can then enter the castle and enjoy all the exhibits located there. In Buckingham Palace, or actually majority of Royal Residences in Britain, visitors are allowed only on certain days in the year and even there only a minor part ofit is made is available for the public. The most of the art masterpieces gathered there are solely for the eyes of the Royal Family and their servants. So, really? Is the Buckingham Palace, hidden behind high fence, a better attraction for the tourists than for example former Royal Palace in Paris, known today as Musée du Louvre, one of the most famous museums in the whole world?

Negligible real political power of Queen Elisabeth, for whom the major duty is to exist and to be a symbol of unity of the United Kingdom seems to support the claims of the republicans. Especially that the Scottish Referendum shows, that even on that field she doesn’t really help the case. So what will be the fate of this poor baby, who was a misfortune to be born into Royal Family? Will the function of the King, a relic of the past, survive long enough for him to become one? We have to remember that to become a king, he will most likely have to outlive his great-grandmother, grandfather and father?  Or maybe the monarchy will be abolished and a poor kid who spent all his life in this golden cage will suddenly has to face the hard reality?

I am sure of one thing. Despite the matter indirectly concerns me as well, as the luxury life of the Royal Family is funded also from my taxes, I can live it with it as a resident of Britain. After all, if you are guest at someone’s home, you don’t start shifting his furniture, even if you think that his place is a demonstration of utterly bad taste. The other thing is that if we remember how much taxpayer’s money is wasted in Poland, the costs of the upkeep of the Royal Family might seem indeed as a bargain to the taxpayer. But my stand when it comes to applying for a British citizenship stays the same. I am a citizen of European Union and the Republic of Poland, my passport gives me possibilities that majority of humanity can only dream about. I don’t believe that going to USA without visa and an opportunity to choose between Cameron and Milliband in Westminster elections are worth becoming a subject to the family of spoiled celebrities. A family that, just like Kim dynasty in North Korea, claims to be a protector of the nation, yet is unable to see inappropriateness of enjoying their lavish style of life while so many of the ordinary people struggle to make meets end, is not the one I would like to swear my allegiance to.

This text was published in 2013 in Polish in  gazetae.com

Do it yourself
gazetae.com Great Britain politics society