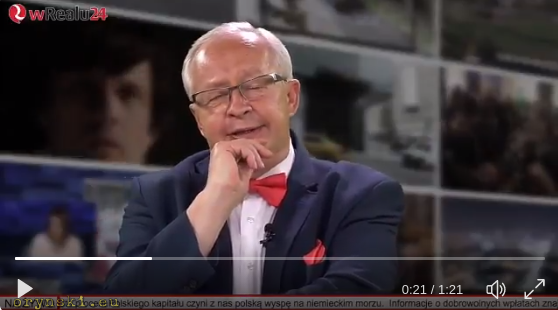 Click here to see most recent part of the series

On Tuesday, in the first anniversary of the first one, another “Black Umbrella protest” had happened. Polish women again took to the streets to protest not only attempts to tighten already tough anti-abortion laws, but in general to fight for women’s rights, respect and equal treatments (more on that here). Nothing could prove better that they still have to go a long way than this fragment from a right wing internet television:

I would allow myself to provide exact translation, word to word:

HOST: This black protest again crawls out, all those femi-nazist and other ones…
GUEST: But tell me, it’s psychologically strange…
HOST: No…
GUEST: because nice looking chicks go to the disco
HOST (talking over him): Not all of them, not all… Ok?
GUEST: and such ugly ones, that nobody wants to shag
HOST: (laughs)
GUEST: are going to demonstration. I’ve been standing there and looking, alright? I’ve been standing there and I’ve been talking to myself: which one I would like to shag… This one? Oh, Christ. That one? No, not that one, God forbid… And so I stood there and, believe me, for the whole time I was thinking: who is to fuck that? And I came to the conclusion that nobody would do it. And this is why they go in that manifestation.
HOST: (trying not to laugh): So you say that they go there due to lack of sex?
GUEST: Yes! Nobody wants, let me call it that way, to take pity on them, nobody wants to pull their panties down, so she goes to the manifestation… But looking from that angle: You, the viewer, resident of Warsaw: go [there] and think: Sklepowicz is not right, I am going to verify him. Go stand there and then [think]: this one, or that one? At the end, you will just go away thinking “oh my God… My wife is better”.
HOST: But this is sexism! This is exactly what they fight against! So nobody…
GUEST (interrupting): …so nobody fucks them? Yeah!
HOST: …so nobody could approach and would not judge if he would like to do something with this one or that one.
GUEST: So they should write it: LET SOMEONE FUCK US! WE ARE READY! THERE IS EQUALITY! WE SHOULD BE SHAGGED AS WELL!

The guest in the studio was not just some unknown guy: Roman Sklepowicz is a lawyer and a legal expert in the public TV channel TVP.INFO (altough recently he became less prominent after it has emerged, that in the past he was a communist regime functionary).

When the new internet television was set up couple of years back, Marcin Rola said: “wRealu24 is going to be new quality of media. I hope everyone will be able to find something to his taste”

I wonder to who’s taste such a commentary could cater?

So if you are to write an e-mail to me to tell me that my series is exaggerated, as it surely cannot be that bad in Poland, well… You might now spare yourself the trouble.

This piece was written for Britske Listy

One Reply to “Meanwhile in Cuckooland: RIGHT WING MEDIA SPECIAL”